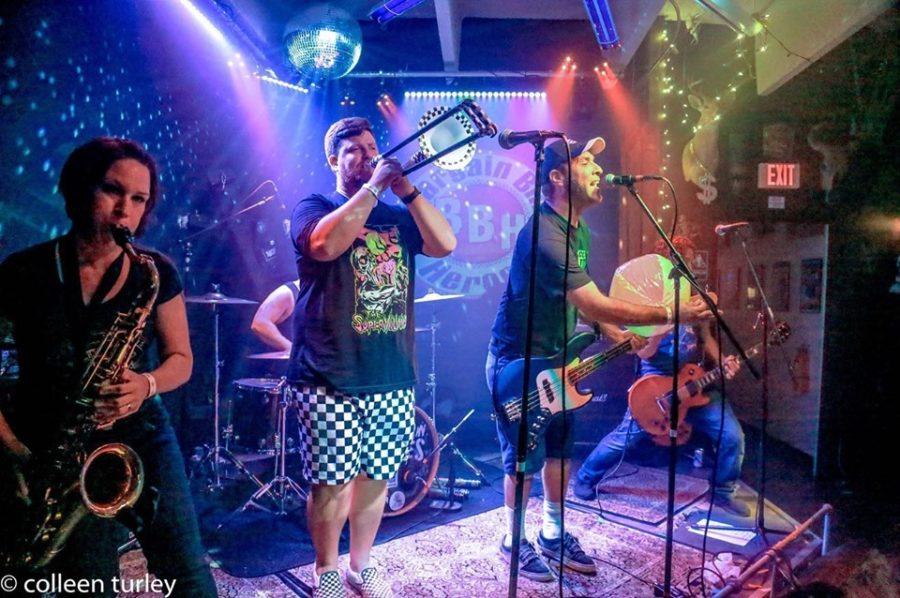 By Nina Mendes
Beat Reporter
Ska-punk is hard to come by in SWFL, but Bargain Bin Heroes (BBH) has made a name for themselves in the Southwest Florida music scene with their unique take on the genre since their debut in 2015.
The band members includes five Fort Myers locals and features Eric “Big E” Demayo, lead vocals/bass guitar. Demayo also writes the band’s original songs.
“I feel we do the genre justice while adding our own little twist,” Demayo said. “SWFL is interesting because having bands cross genre lines with other bands makes for really electric shows.”
Rob Deuce; guitarist, and Aaron Melcher; trombone player/backing vocals, play alongside Demayo in addition to Amanda Brooke; saxophonist, and Jimmy James; drummer.
BBH has played live shows at venues across SWFL since 2015 and occasionally play in the Tampa Bay area.
They advertise upcoming shows on social media platforms like Facebook and Instagram.
“Rack’em Spirits and Times in Cape Coral, and HOWL in Fort Myers have been our biggest supporters, and I feel like we have our best local shows there,” James said. “Playing with other local bands is a blast. So many of them become your friends, and it turns you onto different music that you might not be aware of.”
The band recorded their first full-length album in Dec. 2018 titled, “Droppin the Deuce.”
Stand-out anthems off the eight-track record include “North on 75” and “The Moon.” Both songs showcase the talent of Melcher and Brooke on brass while demonstrating how the band’s various sounds mesh together.
“Hopeless,” another top track, starts with a bass solo from Demayo and talks about his struggle of feeling isolated.
“I feel like it’s the songs and musicianship that has gotten us to this level,” Demayo said. “The album definitely helped us reach a larger audience both locally and across the world. The best part after it was released was seeing people at our shows singing along to our songs. Seeing something like that totally makes all the hard work worthwhile.”
“I think our fun energy really shines at shows,” James said. “We all do it for the love of music, not for money or fame. If something bigger comes from it, that’s great, but for right now we are having the best time playing music together, and that is what matters most.”
The band revealed they are working on a cover EP and plan to release a collection of originals sometime soon. Although there is no official release date, fans can listen to “Droppin the Deuce” on Spotify and catch BBH during their next live performance this month on Oct. 26 at Nice Guys Pizza in Cape Coral.