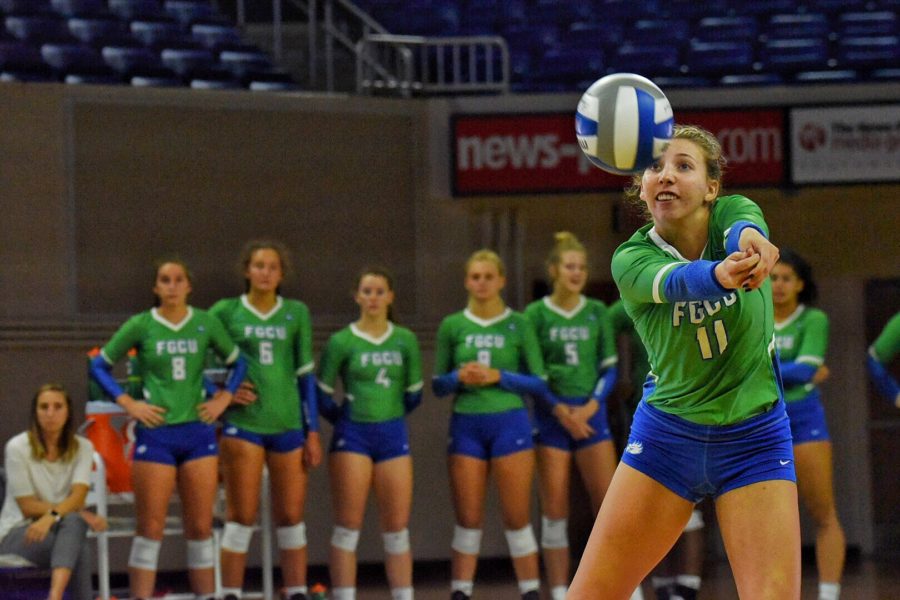 By Jake Henning
Assistant Sports Editor
The FGCU women’s volleyball team got their six straight win Wednesday night, beating FIU in three straight sets (25-18, 25-13, 25-21).
Freshman Erin Shomaker showed out once again, racking up a season-high 14 kills to lead FGCU to the win. Shomaker has been very consistent, having at least six kills in her last seven games.
“Erin had a nice match on the offensive end and kept up her efficiency as the volume increased,” Botsford said.
FGCU has only lost two sets in their last seven games, moving their record to an overall 17-3.
Alana Ryan sparked an 8-0 run for the Eagles, as her serving gave FGCU a 17-7 lead in the second set. Kills from Cortney VanLiew and Danielle Serrano would end the set to give the Eagles a 24-13 second set win.
“I was really impressed with FIU’s defense and serving, which made for some tough sideout scenarios throughout the match,” FGCU head coach Matt Botsford said. “Although we didn’t get off to the start we would have liked, I loved the response the rest of the way. Our middles were very effective, we served extremely well and the floor defense on our end was consistent.”
Dana Axner once again showed up defensively for the Eagles, as she had 18 digs; her 14th match of the season with 15 digs.
The next match for FGCU will be at Alico Arena when the Eagles host NJIT on Saturday, Oct. 19 at 7 p.m.