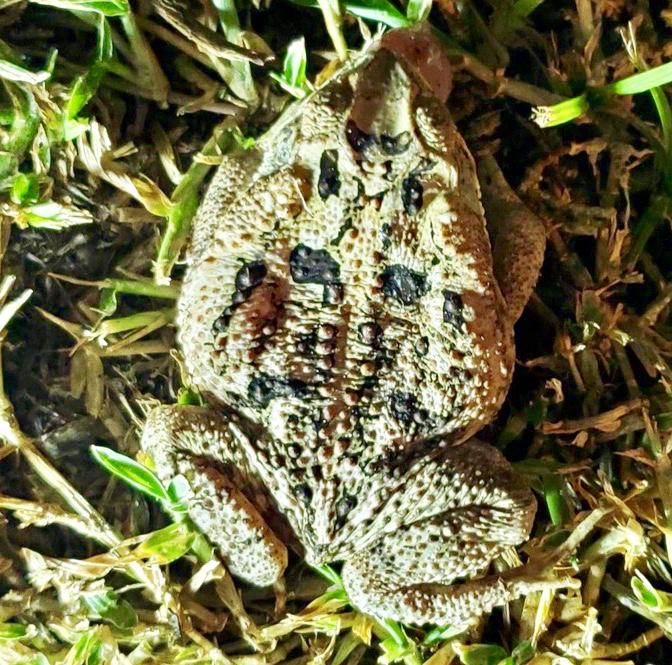 By Samantha Roesler
Opinion Editor
Darlene first encountered a cane toad one evening in 2016 when she saw one hanging out of her dog Brooklynn’s mouth. Brooklynn is a 90 lb. boxer, but her large structure didn’t stop the toad from temporarily incapacitating her. When an animal licks or bites a cane toad, it can be extremely harmful or even lethal.
“Brooklynn was having hallucinations, before I could get her in the car she could hardly walk,” Darlene said. “When I got to the ER, it took three people to get Brooklynn out of my car and on a stretcher. I thought she was gone but they saved her.” Some dogs are not as lucky as Brooklynn.
“I’m sure if my dog only weighed a few pounds when she caught (a cane toad) it would have been all over for her,” Darlene said. Darlene was born and raised in North Fort Myers and didn’t encounter any cane toads until three years ago. These poisonous toads have only recently became a problem that has plagued Southwest Florida.
Cane toads, also known as Bufo toads, are native to South America, being introduced to Florida in the 1930s as an attempt to control pests in sugar cane fields. In the 1950s, the toads started being released into the wild and they are now a great threat to Florida’s native species. Cane toads have enlarged glands that produce bufotoxin, which is lethally toxic.
Vince Mancini is a technician at Bonita Veterinary Hospital and has been practicing there since 1998. Mancini has definitely seen an increase in Bufo toad cases throughout his two decades of practice in Southwest Florida. “When I first started here, it was an occasional thing,” Mancini said. “At a day-time practice it was unheard of. Now, we’re seeing a handful each year that we can confirm.” Mancini says that the hospital now gets 5-6 Bufo toad cases each year that are confirmed, which is a great increase compared to the 1-2 per year that he experienced when he started.
The Conservancy of Southwest Florida is combating the growing cane toad population by partnering with a post-doc from the University of Florida to work on getting more information on this invasive species. This partnership started in July 2019 when they began trapping and tracking the toads.
“They put little backpacks on the toads and they were able to understand where they were moving for certain periods of time and understand where they were spending their time,” Katie Ferron from the Conservancy said. “All we know is what they’ve done- they’re still punching numbers and collecting their data.”
As the Conservancy waits for the statistical data provided by the post-doc, the organization is continuing to learn about the cane toad’s general behavior. “What we’re trying to do is understand more about the species and understand what their overall effects are,” Ferron said. “With invasive species in Florida, it’s so easy for them to thrive- it is hard to eradicate them. Obviously to get rid of all the cane toads is the ultimate and ideal goal, but how we can better manage them and how we can better understand more about them and decrease their effects on native wildlife is the first step of that main goal.”
Not only are large organizations working to eliminate the cane toads, but Southwest Florida residents are working together in the local community to face this problem through social media. There are groups on Facebook such as The Bufo Toad Eradication group which has almost 400 members who discuss how they have been affected by this invasive species. Members also provide advice to each other about how to keep the frogs away from their property and consequently their pets.
“I’ve read all I can about how to deter them because you can’t kill them unless you catch them,” Darlene said. “They are extremely tough and very hard to kill, you can’t just step on them or knock them lightly because they continue to hop on and then you lose them.” Darlene goes through a monthly routine to prevent her dog Brooklynn and her other boxer Tyson from encountering cane toads. She sprays citric acid powder around her fence where she also lays down water softener salt. “If it’s a toad in my yard, I’m going to do everything I can to eliminate it,” Darlene said.
When it comes to reacting after your pet has been poisoned, Mancini emphasizes the importance of acting fast. “If they’re brought to us immediately, the survival rate is near 100 percent,” Mancini said.” Veterinary practitioners prioritize flushing out the pet’s mouth and they treat pets through IV fluids.
Darlene, having firsthand experience with needing to take her dog to the vet after an encounter with a cane toad, also knows the importance of taking action right away. “Now I don’t leave my dogs out in the yard unsupervised for one minute,” Darlene said. “It happens too fast and you have to react too fast or they might be done and gone in minutes.”
When working to avoid your pet coming in contact with a cane toad, veterinary professionals say that keeping your eye on your pet at all times is most important. “If you’re going out at night during the rainy season, have your dogs on a short leash,” Mancini advises. “Don’t let them dive in bushes. If you have a fenced-in yard, be with them. Watch them. Obviously, prevention is key.”
*Darlene asked for her last name to remain confidential.