Amputation is not a minor surgery 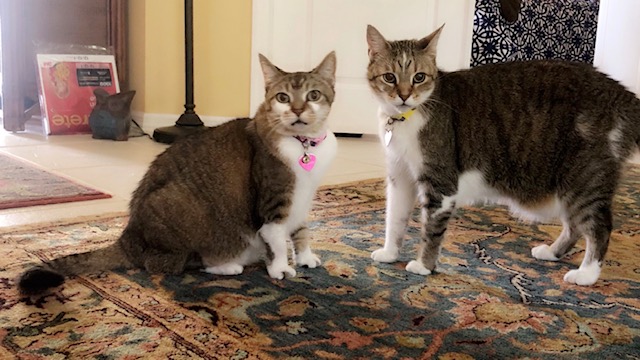 If my six-year-old self knew the reality of declawing, I would have done anything to preventing it from happening to Gary and Puff. Photo by Samantha Roesler

By Samantha Roesler
Opinion Editor
Imagine waking up in a hospital room with the top knuckle of each finger cut off. You are then sent home the same day and expected to perform all your daily tasks and you’re treated like you only had a minor procedure.
Unfortunately, this is the reality that around a quarter of household cats in the United States have to face. According to the Humane Society of the United States, there are almost 20 million cats in the United States that have gone through an onychectomy, commonly known as declawing.
Let me start by saying that I got my two cats Gary and Puff (thanks, Spongebob) when I was six years old and they have since held the title as my best friends.
Some things like the unconditional love I have for my cats will never change. However, if I could go back and change any decision ever made for them, it would be to not get them declawed.
I remember asking my parents what declawing was when I had just gotten my furry friends in first grade. “It is just a simple surgery where doctors take their nails off so they don’t scratch our furniture,” I remember them telling me. Little did I know until recently, declawing is not a simple surgery.
Last month as I was scrolling through the “Cat Lovers Community” page that I’m subscribed to on Facebook, I came across an article about the harsh reality of declawing. This immediately peaked my interest as I recalled my cats being declawed- to say what I read shocked me is an understatement. After perusing the story, I honestly wanted to cry. Did I really put my cats through something so terrible when it was not really necessary? I couldn’t help but open Safari afterwards and continue my research on the topic.
It did not long for me to realize that declawing is actually quite the opposite of simple. Now, I have a passion in my heart for educating others who were like me that have no clue on what really happens during this “minor” surgery. It is time for people to stop seeing the process of declawing cats as a quick procedure that comes without consequences.
Balancing, excercising, defending. These are a few things that all cats- even your average household cat- utilizes their claws for. By declawing your cat, you are stripping them from being able to act on many of their major instincts.
There are multiple techniques done to declaw felines; the most common is through the use of a scalpel blade. Contrary to popular belief, nails are not the only thing removed on the cat’s feet. The declawing procedure includes the amputation of bones, nerves, ligaments and tendons. When the third phalange is clipped, doctors oftentimes don’t slice the bone far enough so partial nails grow back and end up pinching the nerves in cat paws. A study conducted in 2001 by the American Veterinary Medical Association showed that about 80 percent of cats that were declawed had some kind of physical complication after the surgery.
When people go to the pet store or animal shelters and pick up their new adorable kitten, their first concern seems to be that the little ball of fur might “destroy” the home furniture. Well, cats do not scratch with the intent to ruin your furniture. They do it to mark territory and to engage in healthy stretching exercises. If trained properly, your cat will learn from a young age to use a scratching post or board, not your couch. You may also trim your cat’s nails as an alternative- this is completely harmless to them if done correctly.
Sure, declawing may save your sofas, but it doesn’t save your cats from behavioral issues. According to the Humane Society, declawing has proven to make cats more prone to biting humans and other animals, it can make them nervous as they have lost their primary source of defense, and they are more likely to urinate in inappropriate areas.
On a positive note, declawing is getting more attention throughout our country. Last month, New York became the first state to ban the declawing of cats according to The New York Times. A fine of up to $1,000 will be imposed if the procedure is performed without any true medical reason such as an infection. There are a few other cities in the United States that have made declawing illegal, such as Denver and Los Angeles.
There are organizations throughout the country such as The Paw Project that are committed to educating people about the inhumanity of declawing. In summer of 2019, Florida Senator Lauren Book filed a bill that would outlaw the practice of declawing in the state of Florida in 2020.
If you have recently brought home a kitten or if you know someone who has, I ask that you do your research. If my six-year-old self knew the reality of declawing, I would have done anything to preventing it from happening to Gary and Puff.