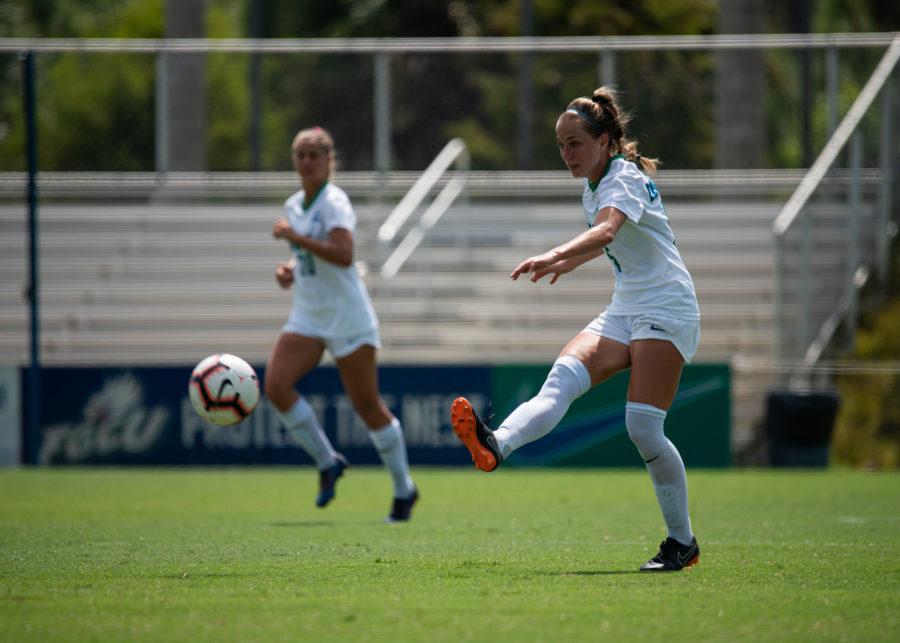 EN Photo by Julia Bonavita // Despite their 1-0 road loss against Liberty, FGCU remains atop the ASUN standings as they quickly approach the conference championships.

By Cole Potts
Sports Writer
The FGCU women’s soccer team lost their first ASUN matchup of the season on the road against Liberty 1-0 early Sunday.
Both teams opened the game in a physical flurry which continued throughout the first half, leading to 15-combined blown whistles.
A penalty by Liberty inside their goalie box gave the Eagles a scoring opportunity with a penalty kick coming up, but Liberty’s goalkeeper would keep FGCU scoreless going into the half.
Within the first 10 minutes of the second half, Liberty was able to secure a 1-0 lead. This would be the first time that the Eagles had been trailing in a game since September 12 against the Florida Gators.
Seniors Evdokia Popadinova and Lindsey Patton both tacked on shot attempts in the second half, but Liberty goalkeeper Melody Jayroe recorded a save on both attempts.
“This was a tough loss for us,” head coach Jim Blankenship said. “We missed out on some good opportunities. We had chances on a penalty kick and a few breakaways, but Liberty really battled against us. Their team capitalized on the only mistake that we made defensively. We had previous opportunities to put the game away, but they ended up having the difference-maker.”
Senior goalkeeper Melissa Weck recorded a season-high 10 saves in the loss. With only two regular-season games left, she is 13 saves away from reaching second place in the FGCU record books for career saves.
With a record of 1-1 in the ASUN this week, the Eagles were able to record double-digit wins for the 11th-straight season under coach Blankenship. This has been achieved 12 out of the 13 times in the program’s history.
The FGCU women’s soccer team will return home to the Nest for a Friday evening matchup on Oct. 25 against ASA Miami, their last non-conference game of the season.