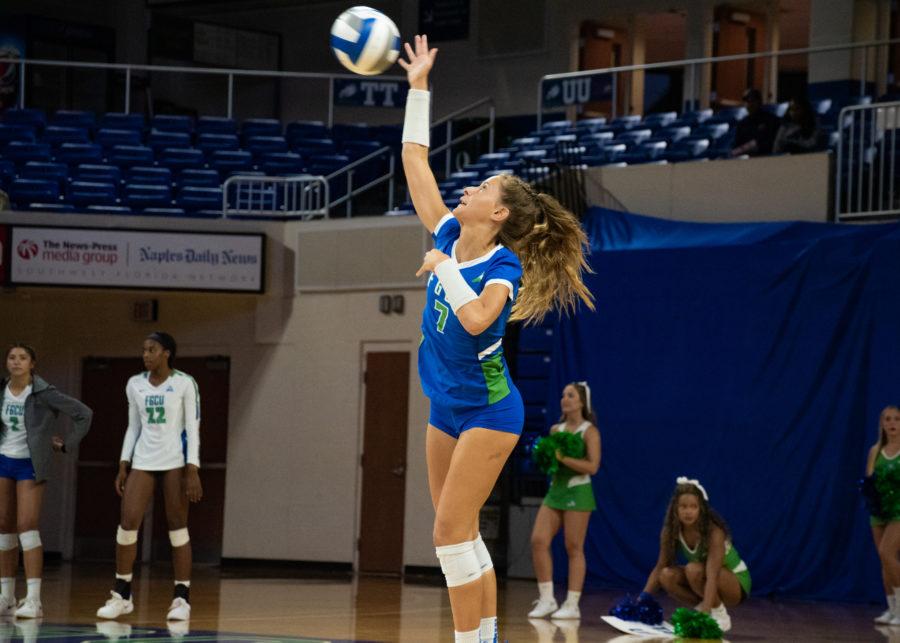 By Bryce Thompson
Staff Writer
The FGCU women’s volleyball team swept Bethune-Cookman (25-15, 25-20, 25-15) on Tuesday night. Standout sophomore Dana Axner made history in the matchup, becoming the youngest player in FGCU history to reach 1,000 career digs.
FGCU’s three-set victory surely didn’t come easy as all three sets were competitive and Bethune-Cookman hung around. The first set was highlighted by a great team hitting percentage late into the set as the Eagles hit .320 as a team during a 17-10 lead. Daniele Serrano’s thunderous kill capped off a 25-15 first set victory.
The Eagle’s second set was highlighted by senior Amanda Carroll as she began her chase for a double-double. Her eighth kill of the match extended an FGCU lead to 16-9 as the set seemed to be dominated by the Eagles.
A swing in momentum began an 11-7 run by Bethune-Cookman, to cut FGCU’s lead to 23-20. The Eagles would respond with powerful hits and impressive digs putting pressure on Bethune-Cookman, leading to FGCU capturing the second-set 25-20.
After FGCU fired out to a comfortable 15-7 lead in the third set, Dana Axner reached her historic 1,000th career dig milestone. FGCU would go onto complete the sweep with a 25-15 third set win, extending the Eagles’ win streak to nine.
“I’ve never seen anything like her,” FGCU head coach Matt Botsford said. “I’ve been at this for a long time and never coached a player quite like Dana. Her command of that position at such an early age is really something special.
Amanda Carroll finished off the night with a double-double, her first of the year, as she led the Eagles with 10 kills and produced 14 digs. The victory marks the last of non-conference play for the remainder of the season as FGCU currently shares first place with Kennesaw State atop the ASUN standings.
The FGCU women’s volleyball team looks to continue their winning ways on the road, as they travel to Jacksonville for a 7 p.m. matchup on Friday, Oct. 25.