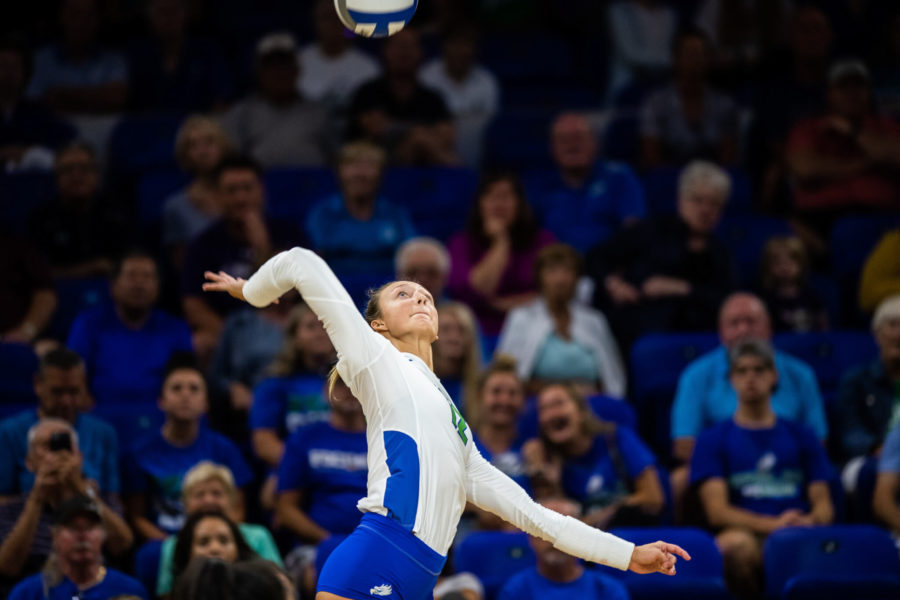 Photo Provided by FGCU Athletics // Cortney VanLiew's 15 kill game in the 3-0 victory Stetson marks her 20th game this season with double-digit kills, as the Eagles extend their winning streak to 13.

By Jake Henning
Assitant Sports Editor
On a night where the seniors were celebrated, the FGCU volleyball team secured their 13th win in a row, beating Stetson in three straight sets (25-15, 25-14, 25-9).
Cortney VanLiew led the Eagles in kills once again as she racked up 15 to get her 20th game of the season with double-digit kills.
After this performance, VanLiew passed Olivia Mesner (1,132) for the second-most kills in FGCU’s Division I era. VanLiew now only trails current FGCU player Amanda Carroll (1,451) on that list.
Not only was VanLiew on the attack, but Snowy Burnam (11) and Danielle Serrano (10) each had double-digit kills as well. Burnam also added ten digs to her stat line, gaining her second double-double of the season for FGCU. Serrano added a match-high five blocks (two solo) to push her career total to 448, which is just 27 shy of moving her to the all-time ASUN record.
Sophomore Dana Axner led the team in digs with 23, extending her dig total to 434 on the year. This was her seventh match of 20 or more digs this season alone.
Chelsey Lockey also had 13 digs while providing 40 assists, recording her sixth double-double of the season. Lockey is only 37 assists away from producing a 10th season of at least 1,000 assists in program history.
The Eagles are three wins from tying the program’s Division I era streak that was set by last year’s team. The win also snapped an eight-game streak that Stetson had previously held coming into the match.
FGCU volleyball will remain at home to matchup against UNF this Sunday, Nov. 3 at 2 p.m. and then travel to Georgia to play Kennesaw State in Georgia on Nov. 8 at 7 p.m. for an important ASUN matchup to stay ahead in the standings.