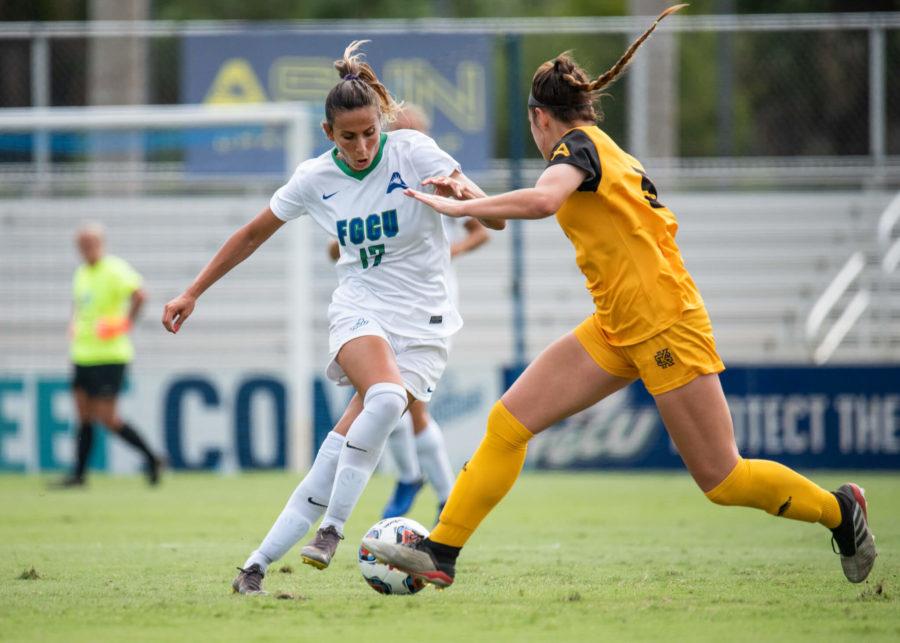 By Bryce Thompson
Staff Writer
The FGCU women’s soccer team’s season came to an end on Sunday afternoon in a heartbreaking upset to No.5 seed Kennesaw State. ending regulation tied at 2-2, two scoreless overtime periods and a 2-1 loss in penalty kicks gave the No.1 seeded Eagles an early exit from the ASUN tournament.
The Eagles looked in control early as a penalty shot in the 10th minute from sophomore Kara Kyramarios gave FGCU a 1-0 lead. Kyramarios’ first goal of the season came at the perfect time, giving the Eagles all the momentum.
The Owls came up short on a few occasions as the Green and Blue stayed defensively sound and looked to head to the halftime break with a lead. With two minutes to go in the first half, senior Evdokia Popadinova capitalized on a mistake from the Owl’s keeper, extending the Eagles’ lead to 2-0 heading into the break.
FGCU went into the second half with a comfortable lead and all the momentum. Even after a disappointing first half, the Owls were not going to go away easily as just 8 minutes in they cut their deficit in half. A 2-1 lead now felt a little less safe for the Eagles, and not even 5 minutes later Kennesaw State capitalized on a chaotic situation in the box, tying the game 2-2.
FGCU looked to somehow put together a last-minute rally as freshman Louise Lillback broke away from the Owls and put a shot just over the crossbar, sending the match into overtime. Fatigue set in for both teams as both overtime periods fell scoreless, setting up a win or go home penalty shootout.
Kennesaw State opened up the scoring in the shootout with the first goal after a save from both keepers in the previous round of shots. FGCU’s Alyssa Abbondandolo tied up the shootout with a perfect strike. FGCU needed a save to stay alive, but ultimately gave up the game-winning goal to the Owls, giving them a 2-1 penalty kick victory.
“Obviously, it’s a tough day considering the way everything went down,” head coach Jim Blankenship said. “You have to give credit to Kennesaw, they came out in the second half and changed their momentum. I thought our guys did a great job settling everything down and we had opportunities to win it, but their goalkeeper really made the difference.”
Despite the FGCU women’s soccer team’s season ending shorter than they had hoped, their overall performance on the year deserves recognition. The Eagles captured their eighth regular-season conference championship in program history, as well as head coach Blakenship winning ASUN Coach of the Year.