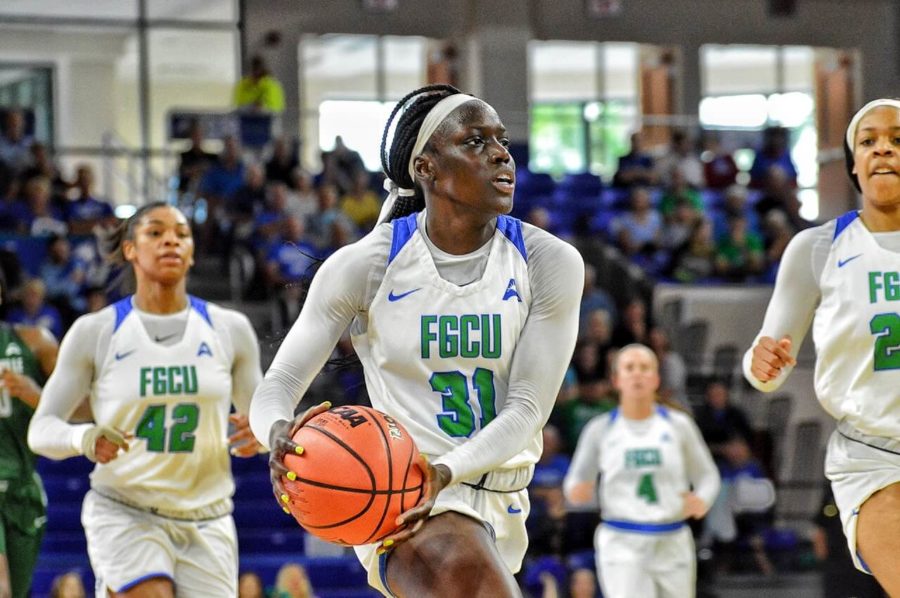 EN File Photo // Nasrin Ulel led the Eagles in points scoring 18 points, shooting 50 percent from the field in FGCU's 100-54 rout of FIU in their season-opener.

By Jake Henning
Assistant Sports Editor
The FGCU women’s basketball team defeated FIU 100-54 to secure their first win of the 2019-2020 season.
Nasrin Ulel led the Eagles in scoring as she put up 18 points, going 4-8 on three-pointers. Keri Jewett-Giles was right behind, as she added 15 points and six assists.
Senior Davion Wingate was also in double-digits for FGCU, adding 14 points on 5-7 shooting from the field. The only other player to be in double-digit scoring for the Eagles was Alyssa Blair, who racked up 13 points and added four rebounds.
“I thought we had great energy in the first half,” FGCU women’s basketball head coach Karl Smesko said. “We forced turnovers and got out in transition. I thought it was a great first half, especially this early in the season.”
FGCU extended its regular-season winning streak to 17, a streak they had carried over from last season. This game also improved FGCU’s record to 11-0 in games against FIU.
Tatiana Adderly led FGCU in rebounds with eight, while also passing Lisa Zderadicka for 10th place on the program’s Division I era assist leaders list.
Four players making their debut scored for FGCU, as Anja Marinkovic (8), Ashli O’Neal (6), Erna Normil (6), and Ashley Panem (3) all got on the board for the Eagles.
The Eagles’ 41 points in the second quarter tied for the 5th highest scoring outage in NCAA history since the switch to quarters. The 100-point performance by FGCU was the 18th time in program history the team has ever reached the point total, including the second consecutive 100-point performance against FIU.
FGCU women’s basketball will be back at Alico Arena for their home opener on Thursday, Nov. 7 when they take on Webber International at 7 p.m.