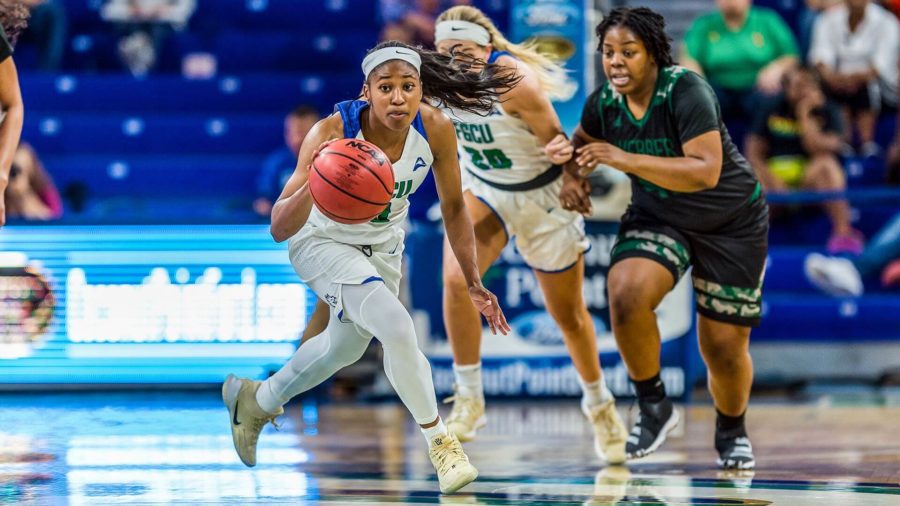 Photo Provided by FGCU Athletics // Davion Wingate led the Eagles with a team-high 23 points in their 99-48 victory over Weber.

By Bryce Thompson
Staff Writer
Coming off of a first-round NCAA Tournament loss to Miami, the FGCU women’s basketball team is looking to bounce back for another successful season. With top scorers from a season ago returning, the reigning ASUN player of the year Nasrin Ulel and Keri Jewett-Giles, the Eagles looked prime to repeat upon their ASUN tournament winning 2018-2019 campaign.
“We expect the conference to be very strong this season,” FGCU head coach Karl Smesko said. “The ASUN has a lot of very good teams and hopefully our non-conference schedule prepares us for the grind of ASUN play.”
FGCU women’s basketball team is making a statement to start the season as it defeated Webber International on Thursday night in their home opener. The 99-48 blowout victory adds to a 12-game winning streak at home which dates back to Jan. 5 of last season.
The Eagles were led by Davion Wingate’s team-high 23 points on 10-14 shooting, as well as Anja Marinkovic’s sharpshooter 20 point performance. Marinkovic’s 20 points came on 5-6 shooting, going 4-5 from three and 6-6 from the charity strike.
FGCU picked up right where they left off from their season opener against FIU, with a lights out first half shooting 54% from the field and holding Webber International to only 19 points. The Eagles had all the momentum going into a 54-19 halftime lead, and it carried out into the rest of the game.
“I thought we got out to a slower start this game as opposed to the last one, but we managed to go on some runs,” said Smesko. “Davion was explosive offensively, and Anja came in off the bench and knocked in a lot of shots. We were able to extend the lead late in the first half and a little more in the second half.”
Webber’s players didn’t reach double-digits and shot 33% from the field on the night. Much of the credit goes to FGCU’s defense for a night in which the team had 14 steals and forced a whopping 30 turnovers.
With the decisive victory over Weber, the Eagles have now outscored opponents 199-102.
FGCU women’s basketball looks to add to that overwhelming margin when they matchup against UCF in Alico Arena next Tuesday, Nov. 12.