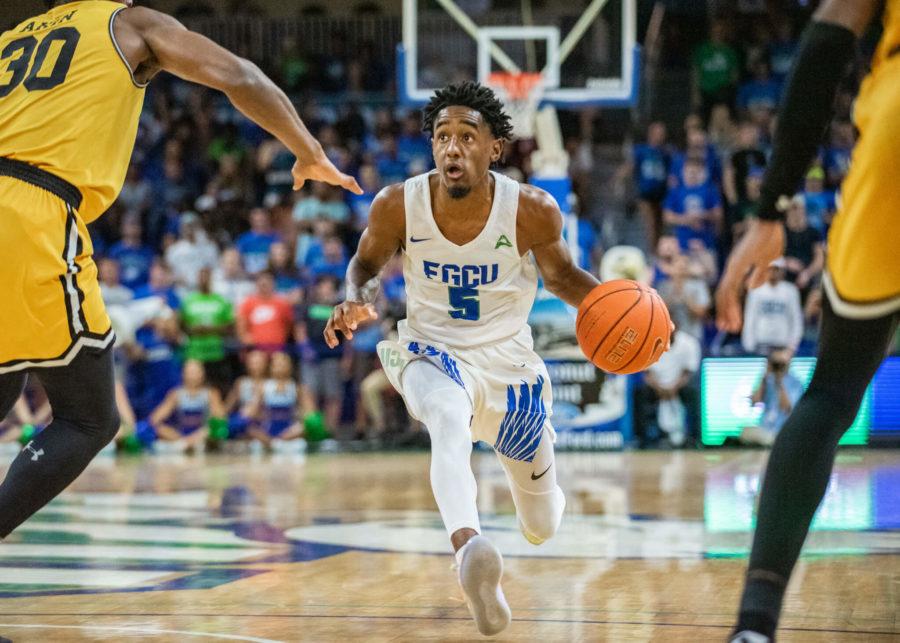 EN Photo by Julia Bonavita // Jalen Warren produced 14 points in his second outing with the Eagles, as they fell just short against UMBC in their 2019-2020 season opener.

By Harold Solomon IV
Sports Editor
The FGCU men’s basketball team fell to 0-2 following a 65-61 loss to UMBC at home Saturday afternoon. Though the Eagles were leading by 10 with five minutes to go in the second half, the UMBC Retrievers were able to catalyst a 16-2 run to come back and spoil the home opener for FGCU.
“I’m definitely frustrated because I think that’s a game we could have and should have won,” said head coach Michael Fly. “I thought we controlled it for 37 to 38 minutes. I told the team that this is part of the learning experience – how to close out games… My hope is that this type of situation is one we win in the next two-to-three weeks.”
Sophomore Caleb Catto led the Eagles 15 point and six rebounds while junior Jalen Warren posted a season-high 14 points in his second appearance for the team. Another new face that produced in a big way was freshman Dakota Rivers, as he produced a season-high eight rebounds against the Retrievers.
FGCU shot 30.2 percent from the field and was 5-of-24 from three-point range. Both teams attempted 37 field goals in a game that featured 54 combined fouls from the teams. The Eagles went 24-of-37 from the line, while UMBC was 21-of-37.
The Eagles went into the second half with a 41-31 lead but UMBC was determined to chip away and come away with a win. Following a UMBC three with 8:30 left cut the Eagles’ lead to five, 54-49, a Rivers dunk followed by a Warren free throw and a Scott lay-up on a fast break pushed their lead back to double-digits with a little over five minutes left in the matchup.
The Eagles would miss their six final shots in the matchup and allow UMBC an opening for the 16-point run. FGCU tried to respond but a missed jump shot gave the UMBC another two points on free throws with six seconds to go. FGCU went full court as they attempted to find a layup for a speedy conversion but the Retrievers defense would clear the board for the win.
FGCU men’s basketball flies to New Hampshire on a quick turnaround for a 7 p.m. matchup against Dartmouth on Nov. 11.