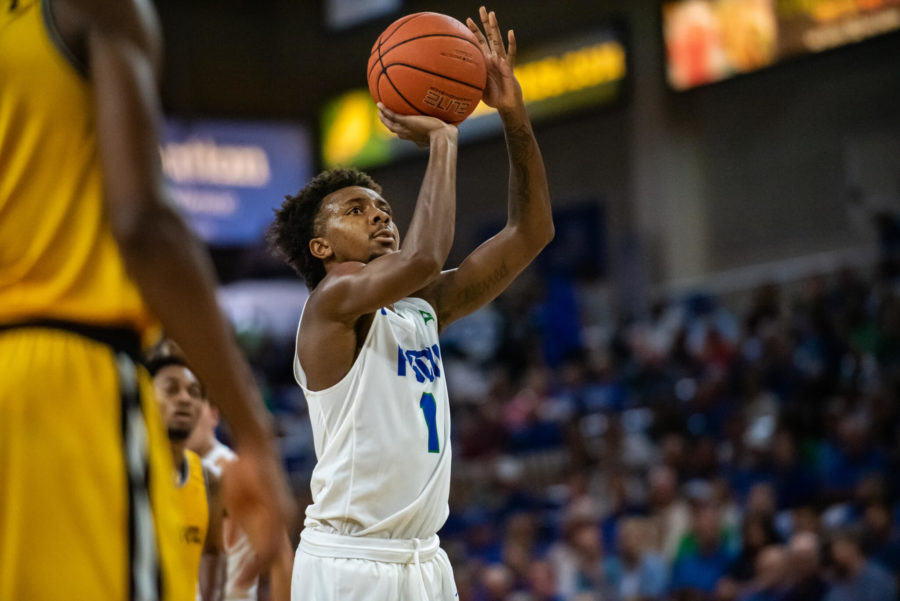 EN Photo by Julia Bonavita // Zach Scott led the Eagles in scoring in their 55-49 loss to Dartmouth, producing 16 points and shooting 5-13 from the field.

By Jake Henning
Assistant Sports Editor
The FGCU men’s basketball team (0-3) dropped their third straight game of the season after losing a close game to Dartmouth 55-49, on the road Monday night.
“I thought we did some very good things in the first half including the run to close it out and tie the game before halftime,” said head coach Michael Fly. “Even after Dartmouth, which was a team that returned a lot of key pieces from last year, opened the second half with that run, we didn’t panic and were able to stay in the game.”
Sophomore Zach Scott led the Eagles in scoring once again, dropping 16 points and shooting 5-13 from the field.
After being tied at 29 at the half, Dartmouth came out on a 12-0 run and held the lead for virtually all of the second half.
The Eagles shot just 34 percent on the game and held Dartmouth to under 40 percent as well. FGCU was also outrebounded 38-35.
“I thought our defensive effort was good in holding Dartmouth under 40-percent from the field,” said Fly. “They were coming off a win at Buffalo which had won over 30 games each of the last two seasons.”
A midrange shot from Justus Rainwater cut Dartmouth’s lead to just three, making it 50-47 at the 5:09 mark. This had come after a 7-point run by the Eagles.
FGCU had some changed to cut the lead in the second half, but missed jumpers from Scott and Catto late in the game led to defensive rebounds by Dartmouth.
After that, it was free throws by the Big Green that would cap off their rally and hand FGCU it’s third loss.
FGCU men’s basketball will continue its road trip as they head to Georgia next to take on Mercer in a 7:30 p.m. matchup on Friday, Nov. 15.