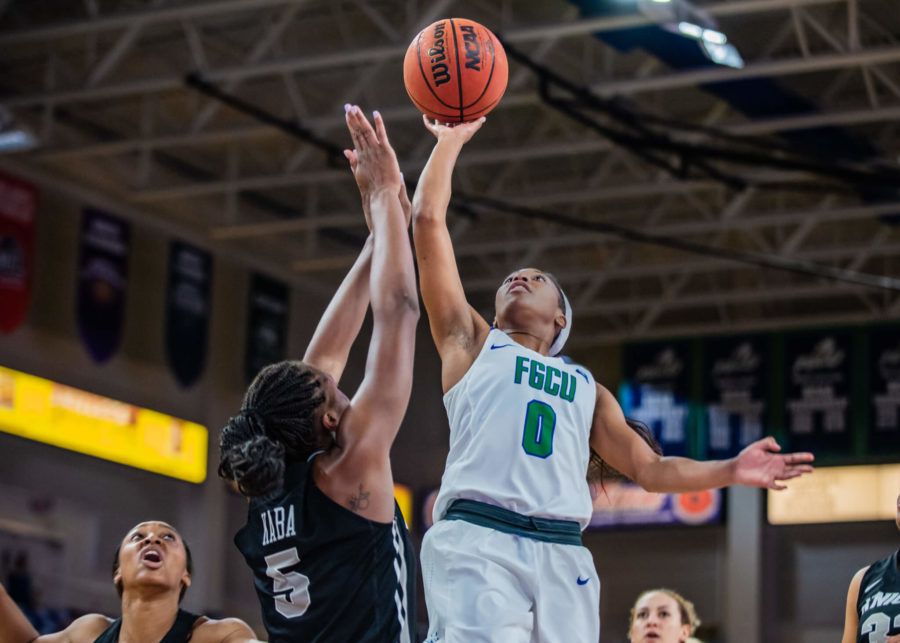 EN Photo by Julia Bonavita // Davion Wingate came one three-pointer short from tying FGCU's single-game record in her 29 point performance in the Eagles' 72-50 win over UCF.

By Harold Solomon IV
Sports Editor
FGCU women’s basketball is off to a 3-0 start on the season following a 72-50 win over UCF at home on Wednesday night.
“This is a quality win against a quality team, so we’re really excited that we played well and got the win,” FGCU head coach Karl Smesko said. “I thought we did a good job on the boards. (UCF) had a big size advantage, but I thought we were physical and rebounded.”
This is the program’s fourth time starting 3-0 on the season since joining Division I competition. This win also extends a winning streak of 19 regular-season games dating back to Jan. 5 of last season.
UCF got off to a 4-0 start in the early going as the Eagles struggle to convert any of their shots. Davion Wingate was able to put back one of those missed shots for a layup, which kickstarted her eight-point stretch that would give FGCU a 16-8 lead. The Knights would respond with a run of their own, scoring 11 points straight to take the lead going into the second quarter.
Wingate continued to produce as she combined with Kerstie Phillis to score 18 of FGCU’s 24 points in the second quarter. The other six points came on a buzzer-beating 3-pointer from Tytionia Adderly and a 3-pointer from Nasrin Ulel in the final minute of the half to give FGCU a 10-point lead over UCF.
The Eagles were able to build a 21-point lead in the third quarter, capped off by a corner three from Tyra Cox. FGCU’s defense held the UCF Knights to just seven points in the fourth quarter, giving the Eagles a 72-50 win over UCF.
Wingate led the Eagles in scoring with 29 points, shooting 10-for-15 from the field, including a 7-for-11 performance from 3-point range, while adding five rebounds, three assists and two steals.
Kerstie Phillis was right behind with 13 points of her own, and Keri Jewett-Giles also recorded 13 points along with a team-high six assists.
The FGCU women’s basketball team looks to improve to 4-0 as they travel to New Jersey to face Princeton in a 1 p.m. matchup on Sunday, Nov. 17.