Princeton hands Women’s hoops their first loss of the season 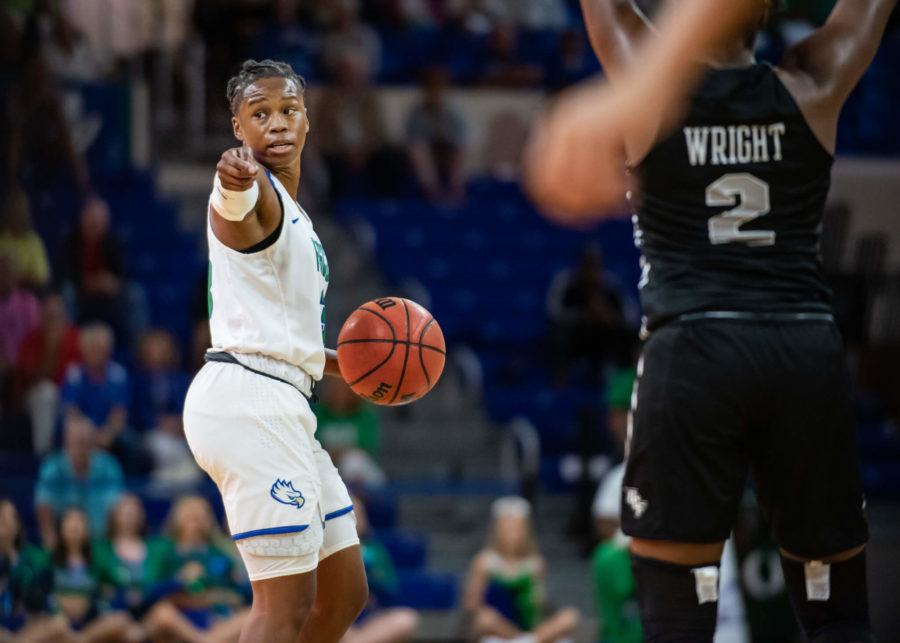 EN Photo by Julia Bonavita // Keri Jewett-Giles led the Eagles with 16 points in their first loss of the season, falling 67-53 to Princeton.

By Cole Potts
Staff Writer
The FGCU women’s basketball team was handed their first loss of the season, losing to Princeton 67-53 on the road Sunday afternoon.
The Eagles started the first quarter down 14-6 but went on a 13-2 run to close out the quarter holding a lead of 17-16, with a buzzer-beating floater by Nasrin Ulel.
FGCU’s offense continually diminished from the start of the second quarter, as they opened up 0-11 from the field, not scoring until 2:44 were left, thanks to a 3-pointer by Davion Wingate.
Princeton was able to accrue a 19-point lead over FGCU until the Eagles were able to shorten the lead to 11 points, 6 of which came from back-to-back three-pointers by Keri Jewett-Giles and Alyssa Blair.
Despite the flurry of points, FGCU’s defense would not be able to stop Princeton’s shooters.
“It was a tough game for us today,” FGCU head coach Karl Smesko said. “Princeton played great and made things difficult. We need to move the ball more and be more active on defense.”
Jewett-Giles finished with a team-high 16 points, while Ulel had 13 and Wingate contributed 12, combining for 41 of the team’s total 53 points.
Tytionia Adderly had a game-high 10 rebounds along with three points, four steals and an assist. Adderly is now four rebounds shy of breaking FGCU’s career rebounding record, which is currently held by Sarah Hansen (877).
The Eagles will return to Alico Arena on Tuesday, Nov. 19, as they try to bounce back against Johnson and Wales (FLA.).