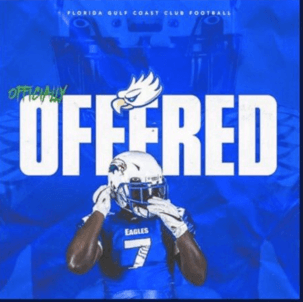 The image that is circulating the internet after over 100 students were "offered" to play on the FGCU football team. FGCU has a student-run football club, but it has nothing to do with admissions or the Division 1 NCAA.

By Leah Sankey & Harold Solomon
Over 100 students spanning the U.S. were ‘offered’ to play on Florida Gulf Coast University’s football team. FGCU has 15 Division I sports teams; however, football isn’t one of them.
FGCU only has a student-run football club.
According to a statement released by FGCU officials, a non-employee, volunteer that works with the football club has been contacting individuals about playing football at the school.
FGCU said that they have no plans to add football to their list of D1 sports.
“This has been done without FGCU’s knowledge or sanction and has caused a great deal of confusion to not only individuals receiving ‘offers’ but to others reading accounts on social media,” the statement said. “These 100+ individuals may not realize the ‘offer’ has nothing to do with our NCAA intercollegiate athletics program, or with the normal process that prospective students use to apply and gain admission to the university,” said the statement from FGCU.
Kevin VanDuser, the head coach of the football club and Southwest Florida realtor, denied any wrongdoing.  However, some of the individuals who received offers believed that the team would eventually be a Division I team and receive monetary packages that would cover football expenses.
One of said individuals was Caleb Petersen, a high school senior from Alaska. Petersen was told that his football fees would be covered once the club team became a Division I program in a matter of years.
“I was not under the impression that I would be receiving a paid scholarship to play football,” Petersen said. “(VanDuser) explained that football was a club sport at the moment and in the next few years the program plans to join NCAA…  I was told that next year the school would be giving some scholarship money.”
A sophomore recruit, who asked to remain anonymous, was also told that he’d have all his football expenses paid upon being admitted to FGCU and that his talent would help the club team transition into a NCAA team.
Another anonymous tip revealed that the FGCU club football team doesn’t receive any funding from the university other than to cover basic club fees.
“There is a wealth of misinformation happening,” VanDuser said. “My staff and I have had over 800 inboxes of highlights in the last week asking about FGCU. We offered kids we liked roster spots for next year and nothing else, and you can ask any of them.”
Chris Lackey, the booster club president, said he was unaware of any offers being made to prospective players.