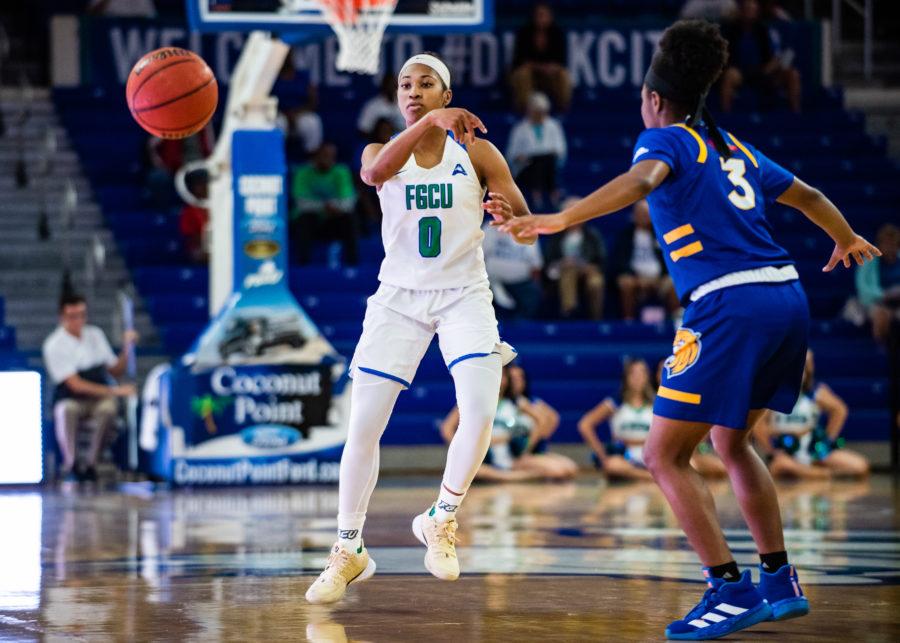 EN Photo by Julia Bonavita // Davion Wingate continues to impress in her senior season for the Eagles, as she led the team in scoring in their rout of Johnson and Wales.

By Bryce Thompson
Staff Writer
FGCU women’s basketball responded from their first loss at Princeton Sunday with a dominating bounce-back victory over Johnson and Wales University. The 89-56 win inside Alico Arena Tuesday night featured many bright spots and positive takeaways for the rest of the season.
“There was definitely some bright spots,” FGCU head coach Karl Smesko said of his team’s performance. “Davion had another outstanding game. She was explosive offensively. Ty set our all-time rebounding record. She’s the best rebounder we’ve ever had here, so it was a good moment to see her take over the top spot in that area. Other than that, we had some bright spots, but there were a lot of areas that we need to clean up and clean up fast if we’re going to beat a team we want to beat.”
Tytionia Adderly broke the all-time FGCU women’s basketball career rebounding record late in the first quarter, pushing her total to 890 all-time. Adderly is averaging almost 9 rebounds a game and consistently gives FGCU a relentless effort down low.
The Eagles’ win featured an impressive 42% field goal percentage as well as 38% from three. Davion Wingate continued her hot streak with another high scoring effort, leading FGCU with 21.
FGCU continues to rain threes at a rapid pace as eight different Eagles connected from deep in the rout of Johnson and Wales.
The FGCU women’s basketball team looks to improve on its now 4-1 record in when it plays Saint Francis on Friday, Nov. 22. Due to Alico Arena playing host to the ASUN Volleyball Tournament, the game will be played at Florida Southwestern College at 2 p.m.