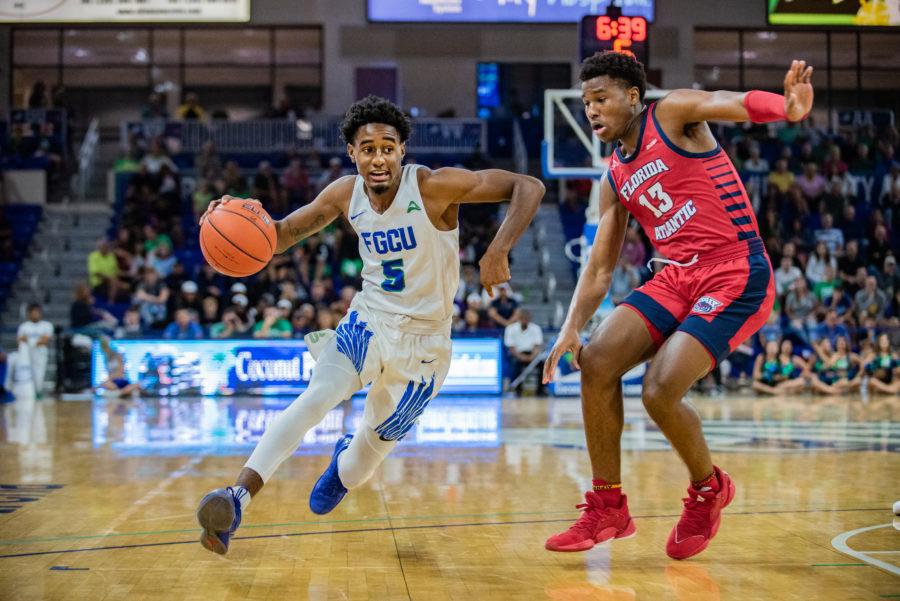 EN Photo by Julia Bonavita // Jalen Warren led the Eagles with 21 points as they got their first win of the season against FAU, coming back from a 19 point deficit in the second half and winning the game 72-70 in overtime.

By Chase Henry
Staff Writer
The FGCU men’s basketball (1-4) used a second-half surge to pick up its first win of the season over Florida Atlantic University (2-3) by a score of 72-70 in overtime. Jalen Warren led the way for the Eagles by scoring 21 points off the bench.
“I thought that was as good of a win just from me being proud of our program and players since I’ve been here,” said head coach Michael Fly. “I kept telling our guys in the huddle [that] you got to know you are going to win the game.”
Going into a media timeout with 7:35 remaining in the first half, FGCU was in a position far too familiar for them throughout the start to the season. A slow start saw the team get into a hole early on, as FAU was able to build up a 16-point gap over the first 13 minutes of action to see the score sit at 22-6.
Sam Gagliardi scored the first basket for FGCU, a three-point shot, within the first four minutes of the game, and the next Eagle to get a point on the board was Caleb Catto with a layup with 11:08 left to play.
Coming out of the media timeout break, the Eagles showed more life with a 10-7 flurry, capped off with a basket by Catto, to end the first half. At the half, Catto and Jalen Warren led FGCU in scoring with four points each, as the Eagles trailed the Owls 29-16.
The Eagles opened the second half the same way they closed the first half. Catto and Zach Scott each made a 3-point shot, while Jalen Warren added a layup and Justus Rainwater threw down a dunk as the Eagles trimmed the Owls lead to nine, at 36-27, with 15:24 remaining in the second half.
Just as it appeared FGCU had turned a corner, the Owls responded by putting on a run of their own. A 9-0 run by FAU saw their lead swell up to a 19-point deficit, at 46-27, with just over 12 minutes remaining in regulation.
After a media timeout followed a 30-second timeout called by FGCU, the Eagles started to chip away at the lead. This run was started when Scott was fouled on his way to scoring a fast-break layup with 10:52 to play.
This run for the Eagles ended up lasting about six minutes during which FGCU went on a 21-8 run to rally themselves back into the game, which was cultivated with a 3-point shot by Catto with 5:39 left in the game.
The Owls used three free throws to bring their lead back to seven with under three-and-a-half minutes to play. A Zach Scott layup and a Sam Gagliardi 3-pointer, off a steal by Gagliardi, pulled FGCU to within two points with 1:26 left in the second half.
Jalen Warren then took over the game for FGCU by scoring the last four points of the half, as the game headed to overtime tied at 57. Overall, the Eagles outscored the Owls in the second half 41-28.
In overtime, Warren got the scoring early in the period for the Eagles, with a layup off an Owls turnover in the first 38 seconds. Throughout the next three minutes, FGCU and FAU exchanged the lead several times, with FGCU earning the highest lead from a 3-pointer by Gagliardi.
Under the 2:00 mark, Gagliardi converted another 3-pointer to put FGCU on top, and the Eagles wouldn’t let the lead slip away from them.
Jalen Warren scored the final four points for FGCU in the win, as he finished the game with 21 points.
On the win, Warren said the first win of the season is always the hardest to achieve, and the manner of this win should be a confidence boost heading into the rest of the season.
“It puts a lot of belief in ourselves [that] if we follow everything Coach is saying, all of the defensive plans with Coach Marsh and [everything] all the coaches are saying, we can pull out wins.,” said junior guard Jalen Warren. “We told ourselves stop being scared. Take the open shots; they are going to fall. We caught fire at the right time.”
Following the win, FGCU men’s basketball heads to Richmond, Virginia to take on No. 21 Virginia Commonwealth University on Saturday, Nov. 23, at 7 p.m.