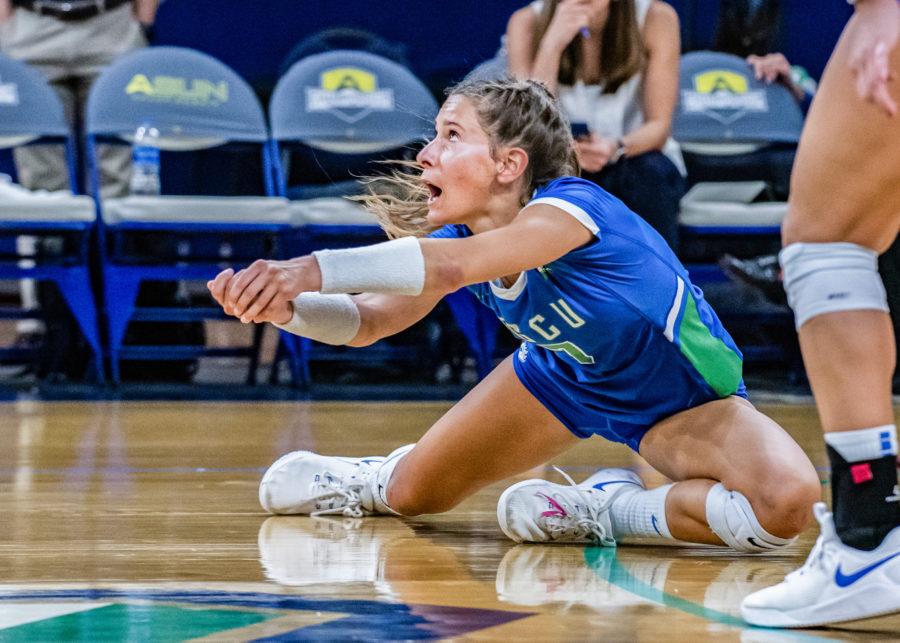 By Harold J. Solomon IV
Sports Editor
After defeating Lipscomb 3-1 in the semifinal match on Friday, the FGCU volleyball team nearly reverse swept Kennesaw State after being at a two-set disadvantage but fell short in the final set of the night.
The KSU Owls took a close first set victory as FCGU’s Cortney VanLiew kill had given the Eagles the set-point, but KSU was able to hold back the attack and rally for a 27-25 set win.
Kennesaw State would ride the momentum, as they amounted several leads throughout another back-and-forth set. The Eagles would again pull within reach but KSU’s offense would prove determined to win and take the second set 25-22.
Down two sets at home with the ASUN Championship on the line, FGCU would try to fight back into the game but again found themselves trailing 21-19. After stopping the first set point, Shelby Beisner and Chelsey Lockey would team up for a block that would give them there first set victory of the night.
The Eagles would continue their hot streak and amounted a 4-1 lead to start the fourth set but Kennesaw State would respond and eventually lead the match 23-21. Following a block from the team of Daniele Serrano and Snowy Burnam, back-to-back kills from Amanda Carroll would earn the Eagles a set point. KSU would tie the match up but FGCU would respond with two consecutive double-blocks to take a 26-24 win and force a fifth set.
The final set of the night saw the Eagles in position to take the match with a reverse sweep as they held a 12-10 lead at one point. Kennesaw State would respond with five of the six final points including the game-winning kill.
Reigning 2019 ASUN player of the year, Cortney VanLiew led the Eagles with 15 kills, 11 digs and assisted on four blocks. Amanda Carroll had an incredible performance as she tallied 14 kills and 15 digs for her 44th career double-double.
Serrano extended her ASUN all-time career block count, which she broke in the Eagles’ win against Lipscomb, with seven more while also notching 10 kills. Tori Morris had a record-breaking performance as she recorded 12 blocks in the match, the most in any Division I era match for FGCU. Morris was named to the all-tournament team following the match.
Reigning ASUN defensive player of the year, Dana Axner had a team-high 30 digs. Axner finished the tournament with two 30-plus dig performances, earning her a spot on the all-tournament team.
“Definitely proud, not surprised at all,” said FGCU head coach Matt Botsford. “That’s been the hallmark of this team all season long, their toughness and grit… Obviously, we would have liked a different result, but I just loved the way they performed tonight.”
Despite the bitter loss, FGCU volleyball still has a chance at playing in the NCAA Tournament but will have to wait and see if they earn an at-large bid during the selection show next Sunday, Dec. 1.