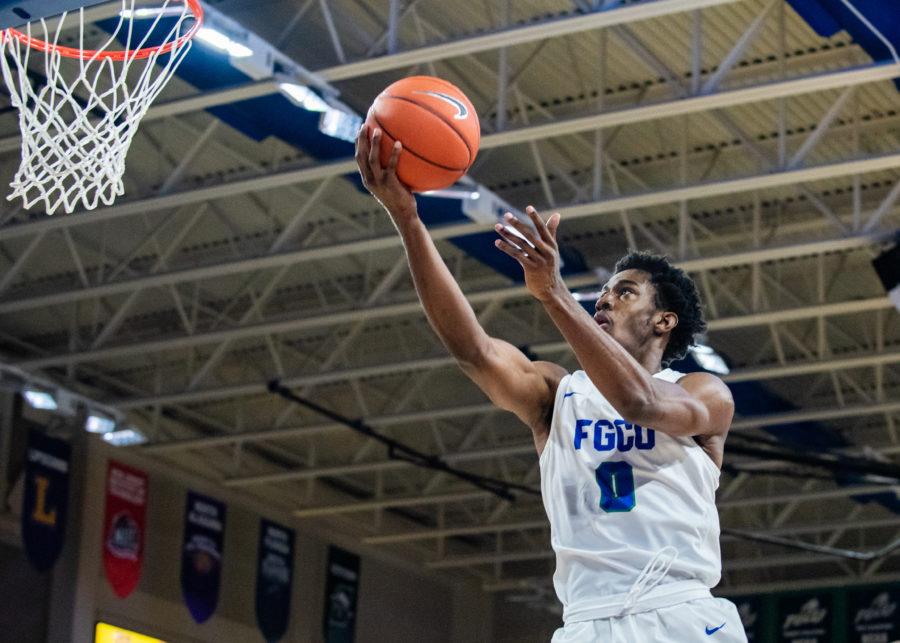 By Chase Henry
Staff Writer
Dakota Rivers scored a career-high, 18 points, and recorded five blocks as the FGCU men’s basketball team (2-5) beat the Florida Institute of Technology 73-59 at Alico Arena on Tuesday night. Sam Gagliardi also posted a career-high in an FGCU uniform, scoring 18 points off six three-pointers.
“Credit Florida Tech. I thought did a job of coming in and being competitive against us,” said head coach Michael Fly. “We got to get better at closing games out.”
The first five minutes saw FGCU come out to a blistering start. After a Caleb Catto bucket with 16:07 to go in the first half, the Eagles’ lead over the Panthers was 13-2.
The first media timeout benefitted Florida Tech by allowing them to find footing in the game with a steady stream of points. Coming out of the timeout, the Panthers scored five points in quick succession.
Even with Florida finding a steady stream of points for the remainder of the first half, FGCU still was in the driver’s seat. The Eagles blossomed to as much as 18 from a Tracy Hector Jr. layup with 49 seconds to go, which saw the lead sit at 40-22.
At halftime, the Eagles lead the Panthers 42-24, and Sam Gagliardi led FGCU in scoring with 12 points.
Over the first ten minutes of the second half, Florida Tech clawed its way back and cut FGCU’s lead down to ten points. This run was capped off from Sesan Russell, who scored 13 of his 23 points, during this stretch for the Panthers.
The Eagles then responded in the last ten minutes by extending back up to 19, which was capped off by a three-pointer by Dakota Rivers.
Coming into the game, the Eagles received a boost with Malik Hardy returning from an injury to make his FGCU debut.
Hardy, who redshirted last season after transferring from Nova Southeastern University and was injured to start this season, scored five points, recorded one steal and grabbed a rebound in 13 minutes.
“I think the thing we struggle with the most is physicality,” Fly said. “Having a guy like Malik who played a year of college basketball. He’s sat out and been in the program and with Travis Wallace for a year, which changes your body quickly with the job he does. I think the physicality he brings, his presence and having another live body that can do multiple things is really going to help us.”
Following the win, FGCU men’s basketball returns to action on Friday at 7 p.m. for a match against the University of North Dakota in the Hilton Garden Inn FGCU Classic at Alico Arena.