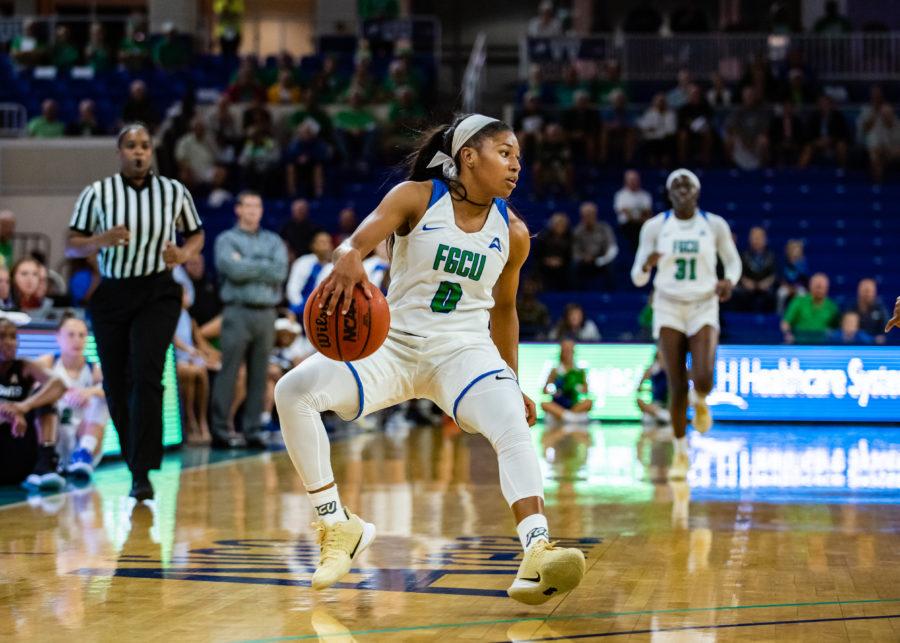 EN Photo by Julia Bonavita // Davion Wingate led the Eagles with 19 points in their stunning 69-60 victory over reigning national runner-up Notre Dame in day one of the Cancun Challenge.

By Harold Solomon IV
Sports Editor
FGCU women’s basketball kicked off the Cancun Challenge with a shocking 69-60 win over national runner-up Notre Dame early Thursday evening.
“You have to give (Notre Dame) a lot of credit,” FGCU head coach Karl Smesko said. “They didn’t quit and really started attacking us. They were able to score quickly and get back in the game. We did a good job taking care of the ball until the end of the game… we made plays down the stretch and were able to pull out a very good victory.”
In the early minutes of the match-up, FGCU struggled to find a rhythm offensively, allowing Notre Dame to open up a 9-2 lead. Nasrin Ulel was able to hit a 3-pointer from and end the drought for the Eagles, followed up by Ashli O’Neal who scored five straight points off the bench as FGCU went on a 16-0 run over a six-and-a-half-minute stretch that lasted into the second quarter.
Though the Eagles would never let go of the lead for the remainder of the game, Notre Dame would continue to give them fits. The Fighting Irish would go on occasional runs, including a 10-0 run towards the end of the game but couldn’t get out of their own way, committing 25 turnovers throughout the match.
FGCU would take advantage of those mistakes, holding a 20-9 advantage in points off turnovers while also outscoring them 34-26 in the paint and 13-2 off rebounds.
Davion Wingate led the Eagles with 19 points, shooting 33% and reaching 1,000 career points in the win. Tytionia Adderly produced a double-double, scoring a season-high 16 points while recording 14 rebounds.
The FGCU women’s basketball team’s next matchup will be against No. 20 ranked USF in day two of the Cancun Challenge on Nov. 29 at 1:30 p.m.