FGCU slips up at home, loses 78-63 to North Dakota 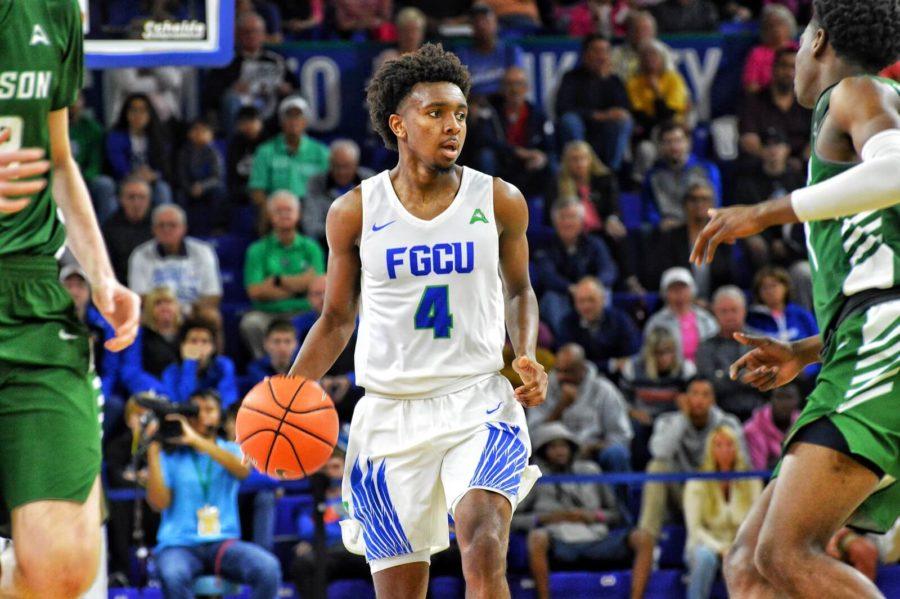 By Bryce Thompson
Staff Writer
FGCU lost at home Friday night after a late second-half run by North Dakota, pushing their record to 2-6 on the year. The 24-9 run by North Dakota sparked a dominant second half for the Hawks, putting the Eagles at 1-1 in the Hilton Garden Inn FGCU Classic.
The tale of two halves started with a competitive first half, mainly controlled by FGCU. Led by Zach Scott’s 9 points on 3-4 shooting from deep, the Eagles held as much as a 30-15 lead. FGCU looked to breeze through the night, but a poor defensive and rebounding effort helped contribute to a 16-4 run to end the half.
“Credit North Dakota for how they played tonight, particularly on the glass where they had a 41-25 advantage,” said head coach Michael Fly. “Controlling the glass is normally a staple of our program so to be out-rebounded like that is extremely frustrating. We felt like if we could rebound, that would allow us to run in transition which we did the entire first half and that produced a 15 point lead.”
North Dakota’s momentum carried into the second half, opening on an 8-2 run, taking the lead 39-36 with 15:10 to go. The Eagles hit a dry spell going 1-8 from the floor, while North Dakota shot lights out, going 6-8 during the same stretch, shooting almost 50% on the night.
A 47-29 second half that seemed to be the exact opposite story of the first had few highlights, but FGCU did finish with four double-digit scorers on the night. A team-high 17 from Zach Scott followed by Justus Rainwater with 12 and Caleb Catto and Jalen Warren with 10 each.
The FGCU men’s basketball team will be back in action Saturday night in its matchup against Campbell on day three of the Hilton Garden Inn Classic.