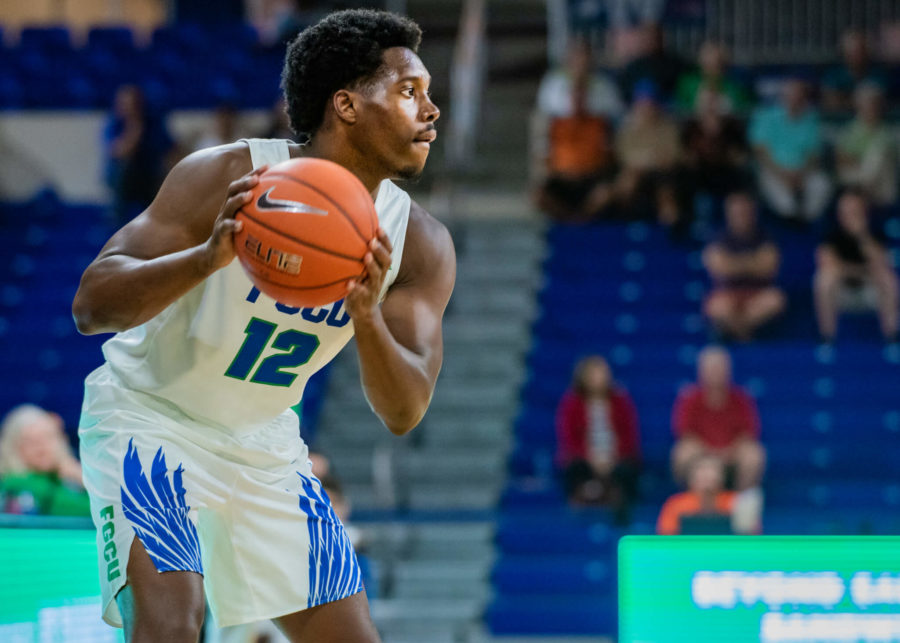 By Chase Henry
Staff Writer
Even with Malik Hardy posting a double-double with 13 points and 12 rebounds, a lack of offense in the second half was the difference for FGCU men’s basketball (2-7), as the Eagles lost to Campbell University Saturday night 51-46.
“I thought tonight we really competed, unfortunately we shot a horrific percentage from the floor,” said head coach Michael Fly. “We out-rebounded them. We got to the foul line and made toughness plays. I thought we gave ourselves a chance to win the game.”
The opening four minutes of the game saw FGCU jump out to a 5-0 lead on a layup from Justus Rainwater and a three-pointer from Jalen Warren. This lead would end up being the largest lead the Eagles would see in the entire first half.
The rest of the first half swayed back and forth between both teams, resulting in six lead changes and three times the teams were tied.
With under 3:26 to go left in the half, the Eagles were losing by four points, and a basket from Caleb Catto and a three-pointer from Hardy gave FGCU the lead going into halftime. At the half, Rainwater and Hardy tied for the Eagles’ leading scorer with seven points each.
On three different occasions in the opening ten minutes of the second half, the Camels were able to extend their lead over the Eagles up to five points, but each time, FGCU was able to claw its way back into the game.
For most of the second half, FGCU had a difficult time breaking down the Camels 1-2-2 zone, which caused the Eagles to waste time on offensive possessions.
Three free throws from Zach Scott was able to trim the deficit down to three with seven seconds remaining, but it proved to be too little too late for the Eagles, as it became FGCU’s second straight loss while leading at halftime.
Tracy Hector Jr. didn’t see any action in the game after picking up an injury in the loss to the University of North Dakota. Hardy led FGCU in scoring with 13 points and led with pulling down 12 rebounds, while Warren added 10 points.
“My biggest thing [is] are we taking steps forward and are we putting ourselves in a chance to win league games,” Fly said. “We’re very confident in our team. I don’t like our record, but we’re very confident in our team.”
The FGCU men’s basketball team faces another quick turnaround with a game against Georgia Southern University, Sunday at 5 p.m., in the final game of the FGCU Hilton Garden Inn Classic.