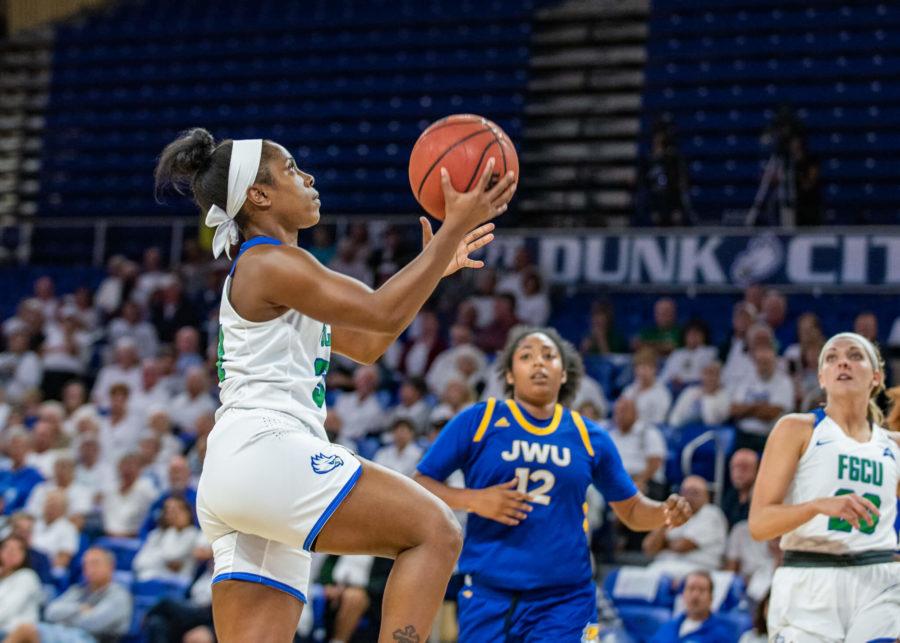 EN Photo by Julia Bonavita // Ashli O'Neal's last-second layup in the Eagles' 71-70 win over South Dakota State capped off an already impressive weekend in which FGCU defeated Notre Dame and No. 20 USF.

By Bryce Thompson
Staff Writer
With 4.7 seconds left FGCU’s Ashli O’Neal hit a game-winning layup to give the Eagles the Cancun Challenge championship over South Dakota State in the 71-70 victory. The Eagles have now won five-straight games over some tough opponents during that stretch.
During FGCU’s winning weekend, it defeated last year’s national runner-up in Notre Dame, the No. 20 ranked USF, and South Dakota State who made it to the NCAA Tournament Sweet Sixteen a year ago. FGCU is building an already impressive resume this season and hopes to be ranked nationally this coming week.
The Eagles were lead by Keri Jewett-Giles’ 24 points with six three-pointers on the night. FGCU as a team was outshot by SDSU with 40% from the field, while South Dakota shot 47%.
A close first half put the Eagles behind 35-33 at the break, foreshadowing an epic finish for the in-season tournament championship.
FGCU entered the fourth quarter down seven and quickly closed the gap with 14 straight points from Jewett-Giles to give the Eagles the lead. Four different lead changes led to a 68-63 advantage for SDSU with 33 seconds left.
Davion Wingate began to show her veteran leadership late with a clutch three, followed by a defensive stop from the Eagles which lead to a foul on a Wingate shot. After hitting all three foul shots, FGCU took a 69-68 lead with 13 seconds left.
Coming off a timeout, South Dakota ran an inbounds play which led to a big shot to take a 70-69 lead, but then the magic happened. Ashli O’Neal’s game-winner sent the Eagles into celebration as they took home the tournament championship.
FGCU women’s basketball will be back in action on the road against Houston on Dec. 4 in a 3 p.m. matchup.