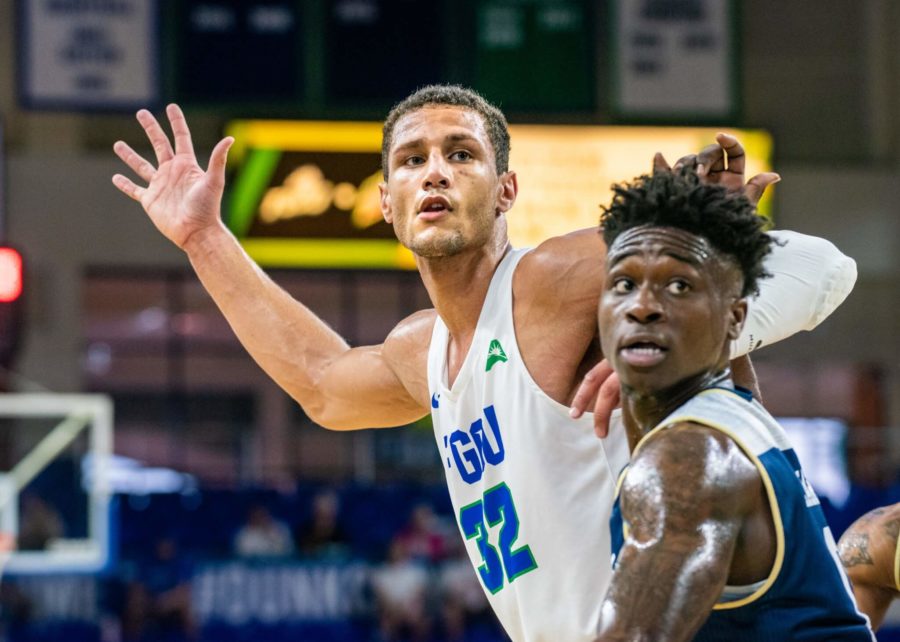 EN Photo by Julia Bonavita // Justus Rainwater was the lone Eagles selected to the FGCU Classic all-tournament team, as FGCU finished the weekend with a 72-57 loss to Georgia Southern.

By Chase Henry
Staff Writer
The FGCU men’s basketball team (2-8) is now on a three game losing streak after its 72-57 loss to Georgia Southern University, Sunday evening. The loss makes it FGCU’s third straight when going into halftime with a lead.
“This is a familiar story at this point,” said head coach Michael Fly. “We were the most aggressive team in the first half. We’re up double figures and had the most energy. They made a little bit of a run, at the beginning in the second half, and kind of counter-punched us. I thought it sent our guys for a loop. They won the first four minutes, and we couldn’t stop the landslide.”
Both teams started slow offensively, as Justus Rainwater made the first basket from open play by either team with 17:47 left in the first half. This basket was part of a 6-0 run by the Eagles that started with two Jalen Warren free throws, and ended with a basket from Zach Scott.
From there, Georgia Southern and FGCU traded runs, with FGCU building up two different six-point leads and an eight-point lead.
After Georgia Southern cut the lead down to three at 21-18, Sam Gagliardi connected from three to restore FGCU’s six-point lead. Gagliardi would go on to connect on two more 3-point shots to lead FGCU in scoring for the half with 12 points.
Georgia Southern went on a 5-0 run to cut down FGCU’s lead down to five at 35-30 at halftime. Rainwater also contributed with six points and five rebounds for FGCU in the first half.
Whatever momentum FGCU seemed to have in the first half all but disappeared in the second half. Georgia Southern’s offense came alive in the beginning of the second half, as Quan Jackson tied the game at 38 off a fastbreak layup.
Over the next four minutes, Georgia Southern went on a 9-0 tear to give them a 47-38 lead, which was capped off a layup by Trey Dawkins.
Georgia Southern controlled the game for the remaining portion, and FGCU could never re-establish themselves. With just under 2:30 left to play, Georgia Southern had built up an 18-point gap to see their lead sit at 72-54.
Dakota Rivers scored the last three points for FGCU off a layup and a free throw before Georgia Southern dribbled out the clock at 72-57.
After scoring 12 points in the first half, Gagliardi was limited to one more point off a free throw in the second half, and still managed to be FGCU’s leading scorer with 13 points. After one game removed from a double-double, Malik Hardy followed up that performance by scoring nine points and four rebounds.
“I told our guys, you have to decide which team you are going to be. We can’t be Dr. Jeckel and Mr. Hyde in different halves,” Fly said. “Are you the team that had North Dakota down 30-15? Are you the team that had Campbell down at the half? Are you the team that should’ve gone into [halftime] tonight with a double digit lead, or are you the team that unfortunately in the second half hasn’t been able to continue to fight and keep up the competitiveness and energy.”
Up next for the FGCU men’s basketball team is a trip to Miami to take on Florida International University on Wednesday, Dec. 4 at 7 p.m.