The life and death of FGCU football 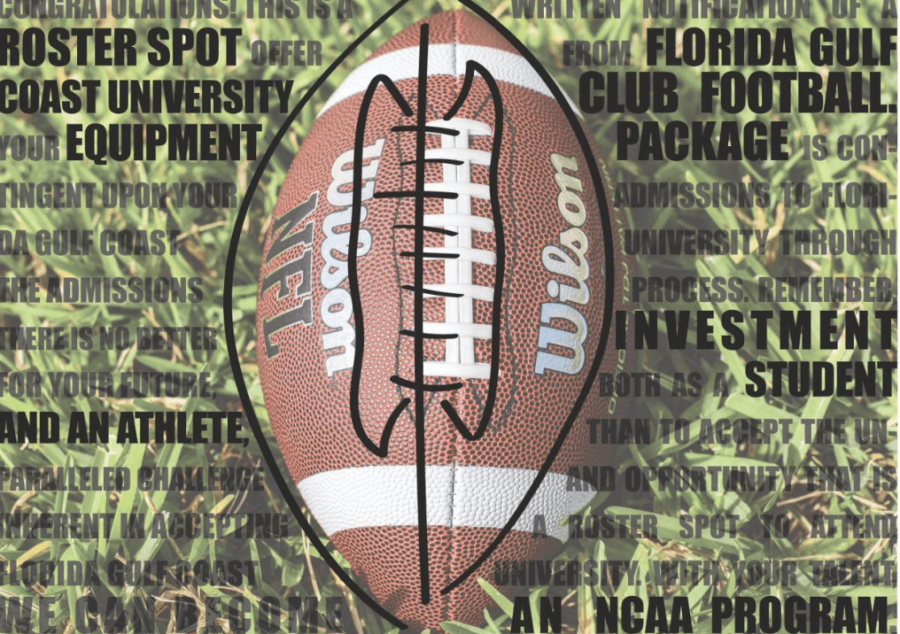 By Leah Sankey & Harold Solomon IV
Hundreds of students around the United States were ‘offered’ to play on Florida Gulf Coast University’s football team during the week of Nov. 20. FGCU has 15 Division I sports teams; however, football isn’t one of them.
FGCU only has a student-run football club, and as of now, it is suspended until spring of 2020.
According to a statement released by FGCU officials, a non-employee, volunteer that works with the football club had been contacting individuals about playing football at the school.
FGCU said that they have no plans to add football to their list of DI sports.
Kevin VanDuser, the former head coach of the FGCU football club and a Southwest Florida realtor was responsible for sending out the ‘offers.’ Amid the weeklong controversy, VanDuser claimed to have resigned. However, an anonymous source at the school said that he was removed from his position.
Chris Lackey, the booster club president, said he was unaware of any offers being made to prospective players.

VanDuser announced that he will be coaching football at the newly formed Champion Preparatory School. The Champion Preparatory School Twitter (@FootballCPrep) has taken over the FGCU club football Twitter account and is being run by VanDuser.
A few days ago, The Champion Preparatory School tweeted a form that asked for this information from high school students: their name, graduation year, position, height/weight, state, hudl, GPA, SAT score, and ACT score.
“This has been done without FGCU’s knowledge or sanction and has caused a great deal of confusion to not only individuals receiving ‘offers’ but to others reading accounts on social media,” FGCU’s statement said. “These 100+ individuals may not realize the ‘offer’ has nothing to do with our NCAA intercollegiate athletics program, or with the normal process that prospective students use to apply and gain admission to the university.”
FGCU President Mike Martin said that it seemed VanDuser suddenly began to take himself as a Division I football coach.
“I hope the students that got [the offer] took the time to do enough research to know this couldn’t possibly be so,” Martin said. “Club sports do not hand out scholarships.”
Martin added that it is highly unlikely that FGCU will ever get a football team.
“There’s not enough players. There’s not enough money, and there’s not enough fans to go around anymore,” Martin said. “It would take someone with a huge checkbook to come in here and say, ‘I’ll subsidize it.’ While I’m president, I won’t tax students for a losing football program.”
Kristen Hunt, a Senior at FGCU said that she wants a football team here, but it would have to be done the right way – which she doesn’t think that VanDuser did.
“It’s messed up making false, empty promises that could potentially alter [those students’] futures,” Hunt said.
VanDuser declined to speak with Eagle News but released a statement to the press.
“There is a wealth of misinformation happening,” VanDuser said in the statement. “My staff and I have had over 800 inboxes of highlights in the last week asking about FGCU. We offered kids we liked roster spots for next year and nothing else, and you can ask any of them.”
VanDuser denied any wrongdoing and claimed that each student was fully aware that this was a club sport.  However, some of the individuals who received ‘offers’ believed that the team would eventually be a DI team and receive monetary packages that would cover football expenses.
One of said individuals was Caleb Petersen, a high school student from Arkansas. Petersen was told that his football fees would be covered once the club team became a DI program in a matter of years.
“I was not under the impression that I would be receiving a paid scholarship to play football,” Petersen said. “[VanDuser] explained that football was a club sport at the moment and in the next few years the program plans to join NCAA…  I was told that next year the school would be giving some scholarship money.”
Maxwell Gagne, a high school student from Illinois was also under the impression that club football would eventually become a DI team.
“I totally knew this was a club,” Gagne said. “I was excited when I found out it was a club and that they were going to become a DI program in a year or two.”
Another high school student who received an offer asked to remain anonymous. He said that he was also told that he’d have all his football expenses paid upon being admitted to FGCU and that his talent would help the club team transition into a DI team.
The FGCU club football team doesn’t receive any funding from the university other than to cover basic club fees.
President Martin said that this situation was a lesson learned, and that FGCU will do better at managing clubs.
“This was just a case where one individual thought he was somehow empowered and more important than it turned out that he really was,” Martin said. “I think the students on the team got that, so they were the ones who effectively dismissed him.”