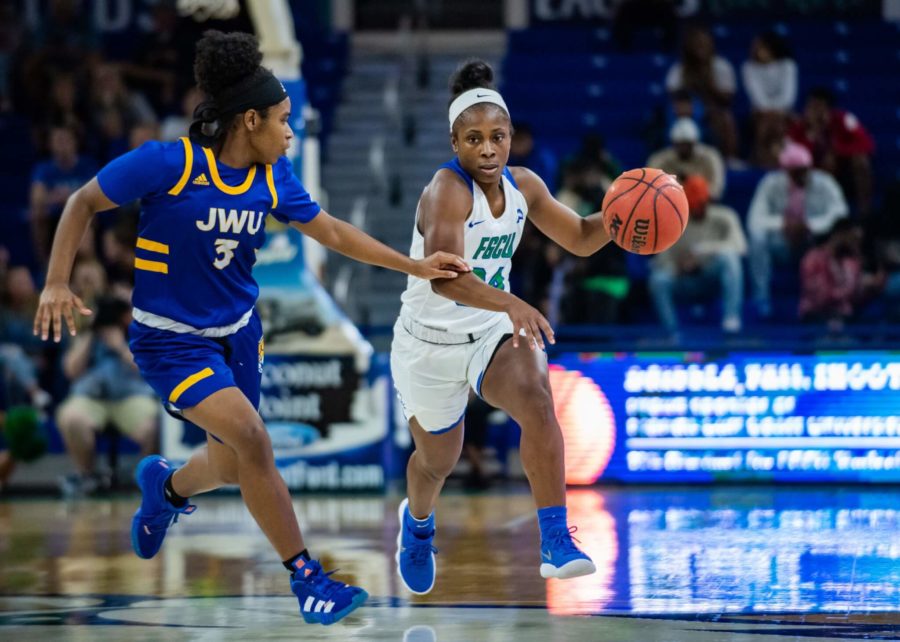 EN Photo by Julia Bonavita // Ashli O'Neal scored 15 points in FGCU's win over Houston to give the Eagles their sixth straight win.

By Bryce Thompson
Staff Writer
FGCU women’s basketball improved to 9-1 on the season Wednesday night after defeating Houston on the road 57-45.
The Eagles 9-1 record is the second-best start in program history, only behind their 14-0 beginning to the 2010-11 season. Led by their senior leadership, the Eagles are poised for a great season.
FGCU was led by Tytionia Adderly and Ashli O’Neal, who combined for 31 points and 10 rebounds in the matchup.
“Ty was outstanding, and Ashli gave us a big spark off the bench,” FGCU head coach Karl Smesko said. “Keri also really helped us on the boards today. Defensively, I thought we did a pretty good job for most of the game. Offensively, we were a little stagnant, but our defense kept us in it.”
A game in which the Eagles never trailed, FGCU set a statement in a dominating second quarter, outscoring Houston 16-7 and taking a 33-20 lead at the half. FGCU never let their lead go below double digits as they secured a victory behind their seniors.
In addition to Adderly and O’Neal’s big nights, Davion Wingate added 11 points as well as a career-high three blocks.
FGCU women’s basketball will return to Alico Arena for a string of games starting on Dec. 9th with a game against Florida Memorial and followed by matchups against Central Connecticut State and SEC powerhouse LSU.