CAPS has a new location, but what exactly has changed? 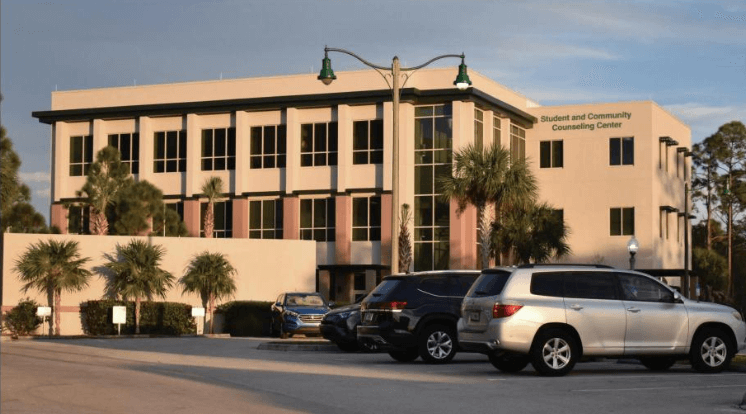 EN Photo by Raphaella Matta. A photo of the new CAPS building on FGCU's campus. The CAPS' space in Howard Hall was smaller, so new people could not be hired until recently.

By Lauren Miceli
News Clerk
FGCU students’ time on the waitlist at the Counseling and Psychological Services has reduced after the center hired more staff members.
After relocating to the third floor of the new student and community counseling center building, the CAPS center hired two clinicians and a case manager. CAPS’ space in Howard Hall was smaller, so extra people could not be hired until recently.
“We don’t have a waitlist right now, so we are doing very well at this point,” said Dr. Julie Rego, the outreach and prevention director at CAPS. “That’s not to say we won’t have one next week, but it’s significantly reduced.”
When there is a waitlist, it consists of students who seek individual, one-on-one therapy sessions with a licensed therapist.
“Over the last several years, we’ve seen consistent increases in the number of students seeking our services,” said Dr. Michael Ghali, the clinical director at CAPS.
Students can attend CAPS workshops and group sessions an unlimited amount of times. A six-session limit, however, still applies to the one-on-one sessions.
“I think that certain cases should be an exception to the [six-limit] rule,” said Shania Bogner, a senior at FGCU. “I feel like I have to get so much out at once, and it’s been overwhelming.”
Bogner first went to CAPS during the spring 2019 semester, and that was also her first time receiving professional help. She experienced the new building as well as the previous location.
“I feel like, in my opinion, it’s lost its warmth,” Bogner said. “It was warm and inviting, and I just haven’t felt that at the new building.”
Bogner had to switch therapists, which made her hesitant to return.
“He [her first therapist] changed my mind on therapy for the better,” she said. “The system of having to explain again and again to a new person all of my trauma and wounds has just made my walls go up further.”
According to Ghali, CAPS implemented the six-session limit each semester to give all students an equal opportunity to receive treatment. He said some students had 15 individual therapy sessions while other students had none.
He also said CAPS has seen over 2,000 different students and attended over 13,000 appointments this year. That number rose from about 1,650 clients last year.
The increase encouraged CAPS to add more group sessions and workshops to address the most common reasons students seek services, which are anxiety and depression.
“A lot of students come in saying they need more coping skills,” Ghali said.
Coping skills can be taught in group sessions so some students don’t require the limited individual sessions.
Along with the individual therapy limitations, the building change also presents a new challenge in the form of parking.
“We’ve had students, especially in the first few weeks, park in the lot and get a ticket,” Ghali said. “There’s no parking for students. There’s no parking for visitors in that lot other than visitors to the second floor.”
Parking Lot 1, the closest lot to the student and community counseling center building, is reserved for faculty and staff.
Ghali said members of the Office of Adaptive Services are trying to add a shuttle stop nearby to make the building more accessible to students seeking CAPS and Adaptive Services.