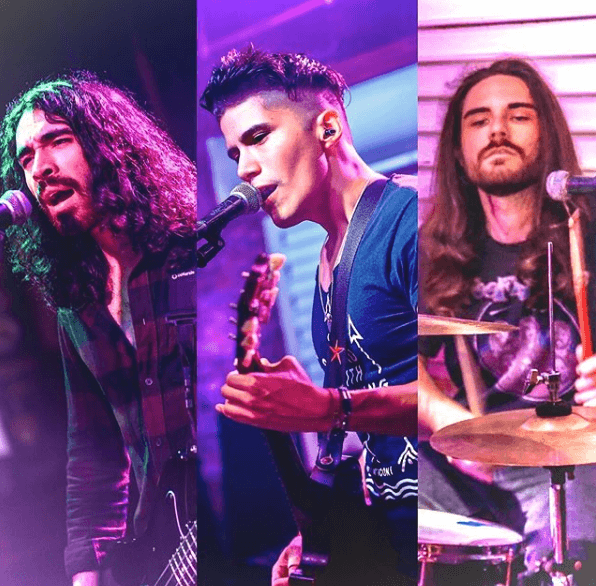 By Nina Mendes
Beat Reporter
Perfect Sequence has been playing in the Southwest Florida scene since 2016. The Fort Myers based alternative rock trio has a following of 2,000+ fans on social media.
They released their earliest work on an EP titled “The New Beginning” in 2014.
The five-track collection of songs features passionate lyrics sung by Caleb Vilca, lead vocals/guitar, paired with captivating riffs that move fluidly across the rock spectrum.
“Away from This” and the album’s title track, “The New Beginning” continue to be fan favorites that often make their way onto the setlist during live shows.
Brendan DuBois plays bass and Skyler Lapham plays drums. All three members are vocalists.
“The three of us have been playing together for a little over a year now,” Lapham said. “Brendan and I make a powerful rhythm section that Caleb is able to build on. We get along well together, and I consider both really good friends.”
Perfect Sequence’s most recent music video is for their track “Chemicals,” which was filmed on North Lake Village’s Waterfront. The video was uploaded to their YouTube page this past summer and it highlights the band’s comedic humor.
Perfect Sequence’s most viewed video is for the title track of their Dec. 2017 album, “Awaken”, which hit over 30K views. The video is a powerful visual to support Vilca’s lyrics.
The song encourages people to aid those in need because one day you may be the one that cries out for help.
“Awaken” is the band’s first full-length album and is available on Spotify and iTunes. The record raises awareness around mental illness and talks about overcoming life’s challenges.
“We have a genuine interest in engaging with the community through our music without fear that it may come off as preachy,” Vilca said. “We really like letting it all out on stage, but that’s not the only reason we do this. [We do this] to see if we can help society in some way as average humans.”
Perfect Sequence draws inspiration from headliners like The Killers, Foo Fighters and Pearl Jam.
Their approach to the rock genre comes across as natural, and their music is easily enjoyed.
“My musical background consists of pop-punk, shoegaze, indie, and hardcore,” said Dubois. “These have all had a huge impact on me and my style of bass playing. That’s what I bring to the table in this band.”
Lapham is a senior at FGCU.
In addition to playing at local venues, Lapham spreads the word about Perfect Sequence through his connection with the university. He joined the band in 2018 and promoted Awaken to the student body after its release.
“I’ve been lucky to use FGCU’s connections as a tool to push our music, and ourselves, into the public,” said Lapham. “We were able to get the word out about the message behind our music video for ‘Learning to Fall,’ in the context of suicide prevention.”
They were invited to play at last year’s Out of the Darkness Walk, an event centered on suicide prevention. The band was also asked to perform at this year’s NAMI Walk to End Stigma, an event geared toward normalizing talks about mental health.
“In the past three years since we’ve been playing, we’ve seen a growth in our scene,” Vilca said. “Although we pride ourselves to have contributed to its growth, the scene has, and will always, belong to many acts with whom we feel humbled to work with.”
Perfect Sequence will play their next show on Dec. 20 at Rack’em Spirits & Times in Cape Coral.