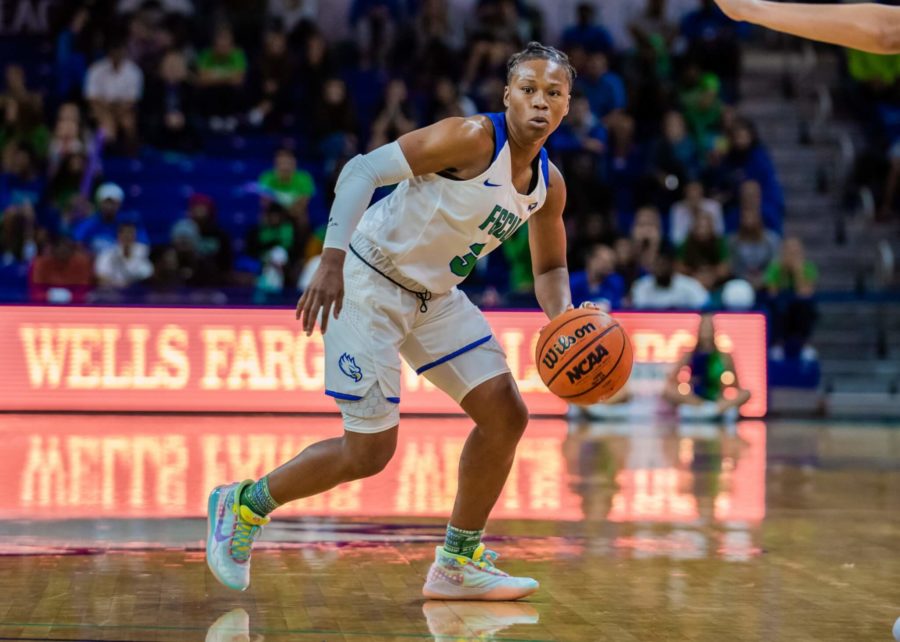 By Bryce Thompson
Staff Writer
FGCU women’s basketball had their eight-game winning streak snapped at home Thursday night 74-63 against LSU. The Eagles fall to 11-2 on the year and despite Keri Jewett-Giles’ career-high 35 points on the night.
“Keri was outstanding,” FGCU head coach Karl Smesko said. “She hit her threes and got to the rim. She’s the one who really got the energy going for us. I think we had some other kids who played hard, but maybe didn’t play as well as we would hope. We’ll get back at it. There’s going to be a lot to learn from this game from our execution down the stretch. They had a player who went off, too. We’ll have to go over how we defend certain situations so we can get a little better defensively, as well.”
The Eagles jumped out to a 13-0 lead in the first quarter behind Jewett-Giles hot start and looked to set the tone early. A crazy first quarter featured FGCU scoring the first 13 points followed by LSU scoring the last 15, giving LSU a 15-13 lead at the end of the first quarter.
LSU shut down the Eagles offensively in the second quarter holding them to only 11 points, while the Tigers continued their 15-0 run from the first. The Eagles went into the half down 31-24, despite Jewett-Giles 16 points.
A competitive first half set up for a back-and-forth third quarter which featured 43 combined points from the two sides. Jewett-Giles continued to be lights out by scoring 17 of the teams 23 in the quarter to push her total to 33 on the night, keeping the Eagles within range.
LSU led the Eagles 51-47 going into the fourth quarter and needed to find a way to slow down Jewett-Giles. With 4:32 left in the fourth Jewett-Giles gave the Eagles a 58-57 lead, followed by a steal on the defensive end leading to an assist, extending their lead to 60-57.
After a few turnovers from FGCU, the Tigers regained the lead at 64-60 and never looked back. LSU finished the game on a 17-3 run and stealing a game on the road. FGCU had 4 of their 10 turnovers on the night within the final four minutes of the game.
FGCU looks to bounce back on Sunday in a noon matchup on the road against Temple, before returning to Alico Arena on December 29th to play Duke.