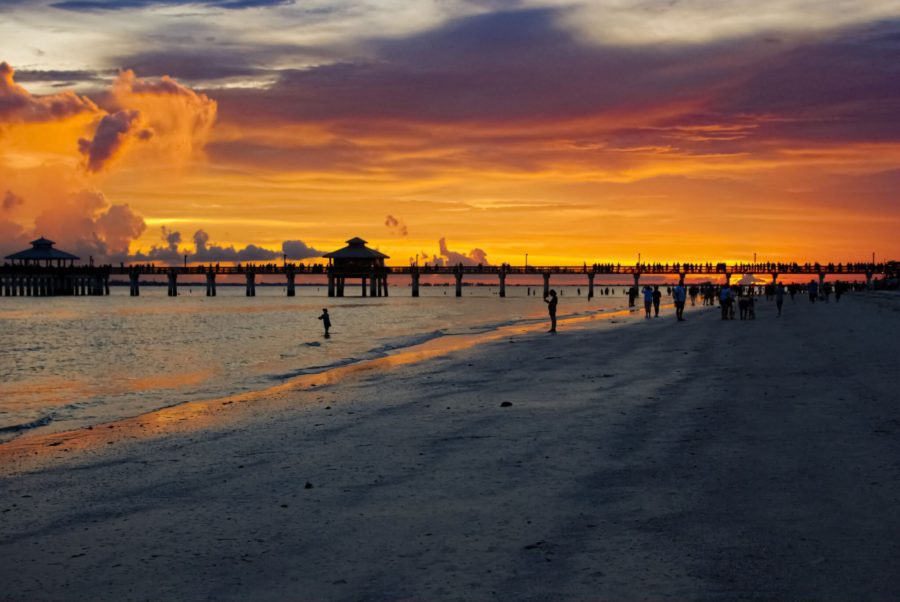 EN photo by Leah Sankey. A sunset on Fort Myers Beach. Town council members say that they are doing what they can to reduce plastic waste on the island.

By Leah Sankey
Assignment & Features Editor
A plastic bag may never fully decompose; oftentimes it simply breaks down into micro-plastics.
According to the Surfrider Foundation, a 501 grassroots non-profit environmental organization that works to protect and preserve the world’s oceans, plastics comprise up to 90% of floating marine debris. Despite these facts, Florida, a state that is known for its beaches, has a law in place that effectively bans local governments from enacting plastic bag bans.
The Florida Retail Federation (FRF) sued Coral Gables over their ordinance that prohibited the use of Styrofoam containers and plastic bags – and won. The FRF is a pro-business lobbying group that represents Walmart, Publix, Target, and other retail giants.
The court ruled that the city’s plastic ban was unconstitutional due to a 2011 law that preempts the “regulation of the use of sale of polystyrene products by local governments.” The Third District Court of Appeals sided with the Florida Retail Federation after a three-year legal battle.
“Local ordinances are illegal under Florida law and create a patchwork of regulations that are confusing to consumers and business owners,” said Scott Shalley, president and CEO of the Florida Retail Federation.
“Florida’s retailers are implementing innovative ways to reduce our collective ecological footprint,” Shalley said. “The issue of plastic waste is complex and requires a comprehensive approach to material management, consumer education and individual behavior.”
Fort Myers Beach town council member, Joanne Shamp, said that the town will continue doing everything that it can to reduce plastic use on the island. The town banned plastic straws in 2017. In April of this year, the Florida Senate passed a law prohibiting local governments from enforcing plastic straw bans; however, Gov. Desantis vetoed the bill.
The town of Fort Myers Beach paid for and distributed about 3,000 reusable bags in 2018 and plans to have more made. Shamp said that the island would like to ban single-use plastic bags but is concerned about retribution from the FRF.
“Water quality and the environmental impacts of micro-plastic pollution must be addressed,” Shamp said. “Community leaders, especially on barrier islands and along Florida’s coastal waters should not be prevented from making policy on behalf of the health and welfare of the citizens, the local economy and the environment that sustains life itself.”
Surfside, Palm Beach, Gainseville and Alachua County all voted to repeal their proposed plastic bag bans in August. This isn’t because the municipalities decided against reducing plastic waste, but because they each received letters from the FRF, according to the Tampa Bay Times. The bans were repealed to avoid lengthy legal battles.