I tried goat yoga and you probably should too 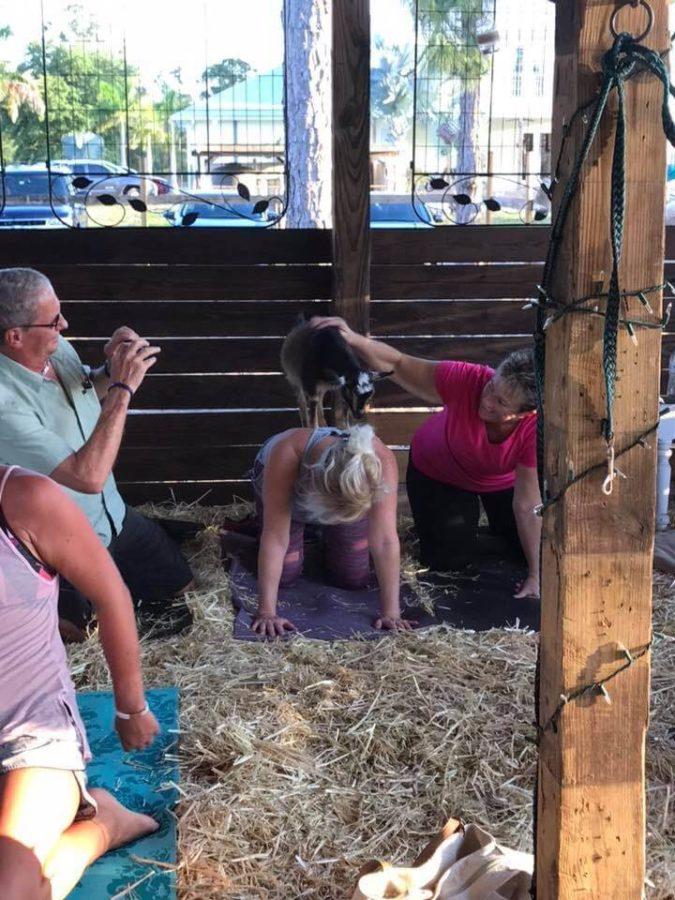 Barnyard Yoga is held at Good Fortune Farms in Lehigh Acres. Here, a baby goat is seen helping a yogi with a pose. EN photo by Leah Sankey

The GPS took me through a long maze of roads alongside farmhouses with massive yards. Finally, I arrived at Good Fortune Farms for my much anticipated goat yoga class.
I was greeted by a pony that came up to my chest. He was roaming freely about the farm. I let him sniff me and then I stroked his head. I loved it here.
There were about 30 other people there, ranging in age from 2-60 years old. There were three men in attendance with their wives. An older man told me that he was there to be his wife’s “personal photographer.” He wore a point and shoot camera around his neck.
We were all ushered into the barn where we chose a yoga mat and were handed some snacks for the baby goats. The snacks consisted of lucky charms (not the marshmallows) and oats. It smelled… earthy. The smell wasn’t awful, but it definitely smelled like a barn.
Mary Burgess, a Cape Coral veterinary technician, is the owner of the 10-acre Lehigh Acres farm that is home to the barnyard yoga classes.
Burgess went over the rules for interacting with the goats. Really, the only rule was to not stick your fingers in a goat’s mouth. Which seems reasonable.
We were then warned about goats going when they have to go, wherever they feel like going; which occasionally means it happens on a yoga mat.
Then, six baby goats bounded into the barn. My heart almost exploded.
They were some of the cutest creatures I had ever seen. They were also absolutely insane. One jumped on top of another, causing it to topple over. Others attempted to jump on a platform and didn’t quite make it. Goat-parkour is a thing, I’m pretty sure.
I was surprised at how similar to puppies they were.
“You can just scoop them up,” Burgess said. “They may struggle a little bit initially, but I swear they love cuddles!”
They zoomed about the barn, favoring those who had treats readily available. A little black and white goat came up to me and gingerly took a few treats from my palm and then relished in the head scratches before moving on to the next person.


Our yoga instructor arrived after a half hour of unstructured playtime with the goats. Her name was Jenna Love. Which is a perfect name for a yogi, if I do say so myself.
Jenna Love spoke in a soft and level voice. She didn’t talk about aligning our chakras — which was a welcome surprise.
“We’re all here to smile, laugh and maybe even do some yoga,” Love said.
We did “downward baby goats,” planks, and sun salutations. All the while, the goats were trying to eat my shoes and hair. They jumped on top of a few people as they planked.
I had to break my pose a few times to nuzzle a goat.
We ended our class with a collective “namaste.”
I absolutely recommend goat yoga, but there’s a few things to keep in mind before going:

Goats go when they have to go, accept that you might have a goat go number 1 or 2 on your mat.
Your clothes will get dirty. You’re either going to be outside or in a barn, so leave the Lulemon at home.
It will be focused on the goats, not the yoga. It won’t be like the relaxing yoga class you’re used to. Goats will be jumping all over you. If you take any class that involves animals, it’s more about the novelty than the workout.

If you want to try some basic yoga and hang out with some adorable farmhouse animals, then give it a go.
Good Fortune Farms is located at 1810 Desoto Ave., Lehigh Acres
Visit barnyardyogainc.com for information on upcoming classes.
*This piece was originally written and published on Medium in April of 2019.