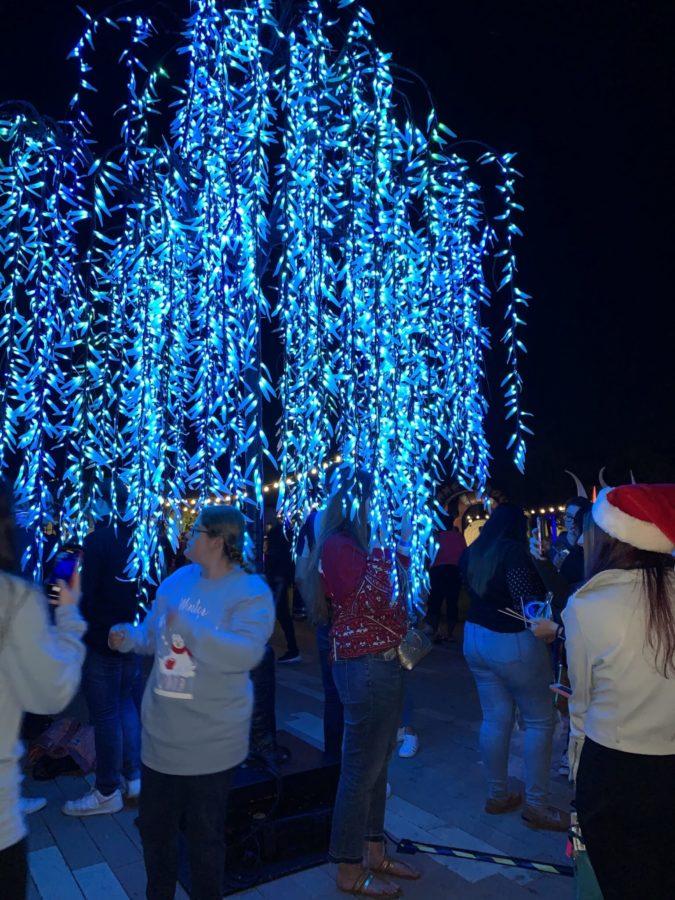 By Nina Mendes
Beat Reporter
When asked to picture what encapsulates the winter season, it’s common to think of the glistening sheet of ice coating white mounds of snowfall. The trees are bare, exposing brown, brittle bark, and all foliage has been stripped of its color.
For Florida natives, however, daily sunshine and temperatures hovering in the 70s are an everyday luxury in the winter. There are the outlier days that dip into the low 50s and the occasional rain shower, of course.
But what about those who prefer sleigh riding to beach-going in December? And how about the students who want to sip hot chocolate while watching the snow cascading from the clouds?
FGCU’s Programming Board (PB) hosts an annual winter-themed event that allows students to celebrate the holidays and embrace the season before the semester ends.
2019 was the tenth anniversary of Winter Wonderland, which took place on December 6 on the library lawn.
PB president, Kyle Grosskopf lead the event this year with around 900 students in attendance.
“We tried to add as much ambiance with the fake snow, holiday lights and the different inflatables to make it feel like students were at a winter carnival,” Grosskopf said. “Students love to come and relax with their friends before finals begin. It’s good stress relief.”
The attraction that brought in the most attendees was a station where students could stuff plush animals, similar to Build-A-Bear Workshop.
Other popular activities included glow in the dark mini golf, snow globe making, a hot chocolate bar and an inflatable snow globe photo booth.
“I attended winter wonderland because I wanted to get into the holiday spirit,” freshman Caitlin Swan said. “It was fun and festive, and there were lots to do pertaining to the holiday season.”
Swan has lived in Florida for the majority of her life. Her definition of winter is spending time with family and friends, rather than the cold weather.
Junior Megan O’Brien, however, has a differing viewpoint.
O’Brien is from Rockland County, New York, and visits home frequently throughout the year.
Her favorite thing about spending winter break up north is the snow and colder climate.
“It’s nice to have a few weeks to experience the snow before coming back to school,” O’Brien said. “I definitely think Winter Wonderland does a great job to get students in the holiday spirit.”
Winter Wonderland ran from 8 p.m. to 11 p.m., and PB staff began setting up as early as twelve hours before the entrance gate opened.
Members of the PB team were managing each booth to ensure the event ran smoothly.
Kyle Grosskopf was able to use his own experiences from living in Tennessee to plan this year’s event and incorporate his favorite memories into Winter Wonderland.
“This year, we tried to incorporate everything students wanted from our survey,” Grosskopf said. “It turned out great this year because of the amazing team that helped plan this event with me. I couldn’t have done it without the support of everyone who contributed to the event.”