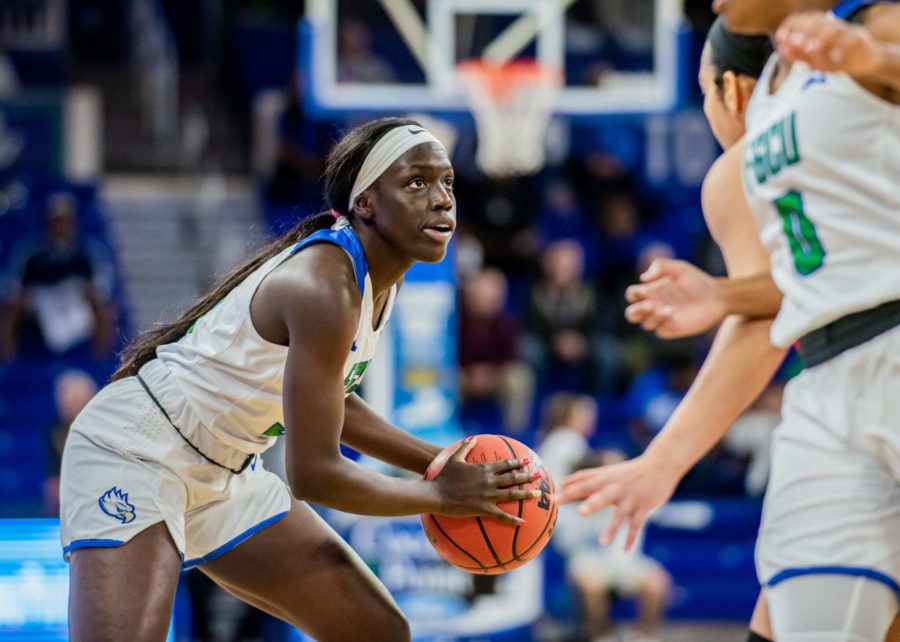 EN Photo by Julia Bonavita // Nasrin Ulel served up 19 points for the Eagles, as they blew out Stetson 89-47 for their largest-point margin win this season.

Noah Clifford
Staff Writer
FGCU women’s basketball extended its conference win streak to 31, following a 89-47 rout of Stetson this past Saturday. The 42-point victory was also the largest winning margin in the series between the two teams.
Nasrin Ulel and Davion Wingate led the charge for the Eagles as they each recorded 19 points and combined to shoot 13-for-28 from the field, including a 9-for-18 performance from three.
“We played much better today,” FGCU head coach Karl Smesko said. “We were better defensively, and we moved the ball quicker on offense. Most of our players played really well, too, and I loved the energy from (Kerstie) Phills.”
Phills shined with 11 points of her own along with five rebounds that would prove crucial in the final quarter to ice the game for FGCU.
With the win, No.25 FGCU is 12-2 all time as a ranked team and is currently tied with Stony Brook for most wins this season across the nation.
FGCU women’s basketball will remain on the road to North Florida on Monday, Jan.13. The Ospreys are the last team to give the Eagles, who were nationally ranked, a conference loss nearly two years ago.