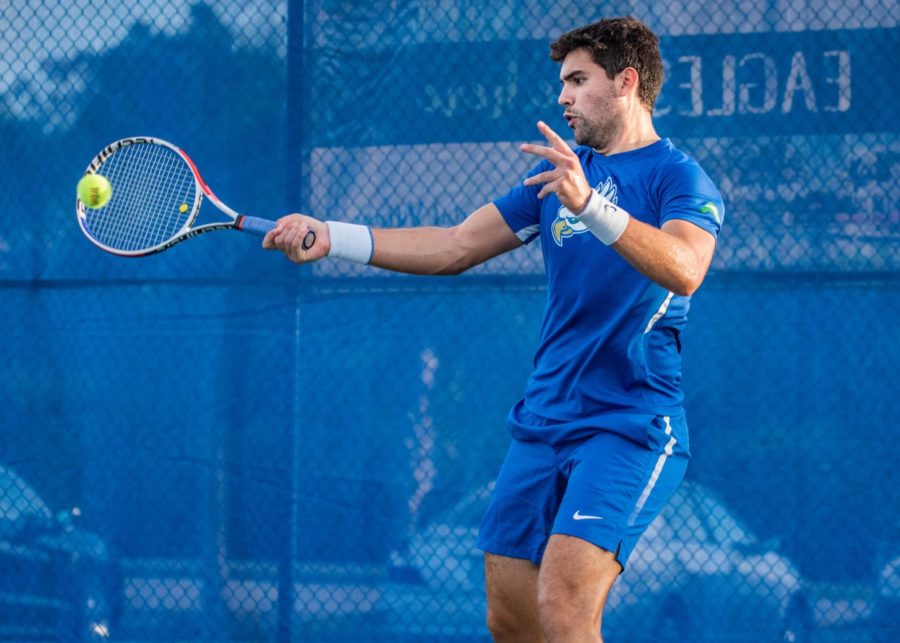 EN Photo by Julia Bonavita // Senior Marcelo Tebet played tough three-set matchup but couldn't record a point for the Eagles, as FGCU fell to USF 7-0 in its season opener at home.

Bryce Thompson
Staff Writer
Bryce Thompson
Staff Writer
FGCU men’s tennis dropped their first match of the 2020 season, 7-0 to USF on Saturday night at the FGCU Tennis Complex. Despite not being able to record any points throughout the contest, seniors Felipe Ramirez and Marcelo Tebet put their endurance on display as they each took their opponents to three sets.
“USF is a really great team,” head coach CJ Weber said. “Their head coach has done a great job with their program and their talent runs really deep. They took care of business and made the match tough for us. We knew it was going to be really tough and I was hoping we could squeak out a few points at the end, but they put us away. We play tough non-conference games like this to expose our weaknesses and I’m excited to get back to work before next weekend.”
Following a 6-2 loss in the first set, Marcelo Tebet was able to respond with a second set victory of the same score before USF’s Jakub Wojcik took the final set 10-6. Fellow senior, Felipe Ramirez would take the first set in his matchup before Chase Ferguson of USF would take the next two sets back-to-back including a fierce 12-10 victory to close out the match.
FGCU will look to bounce back in their next few home matchups against Georgia Southern and Florida A&M starting on Friday, Jan. 17.