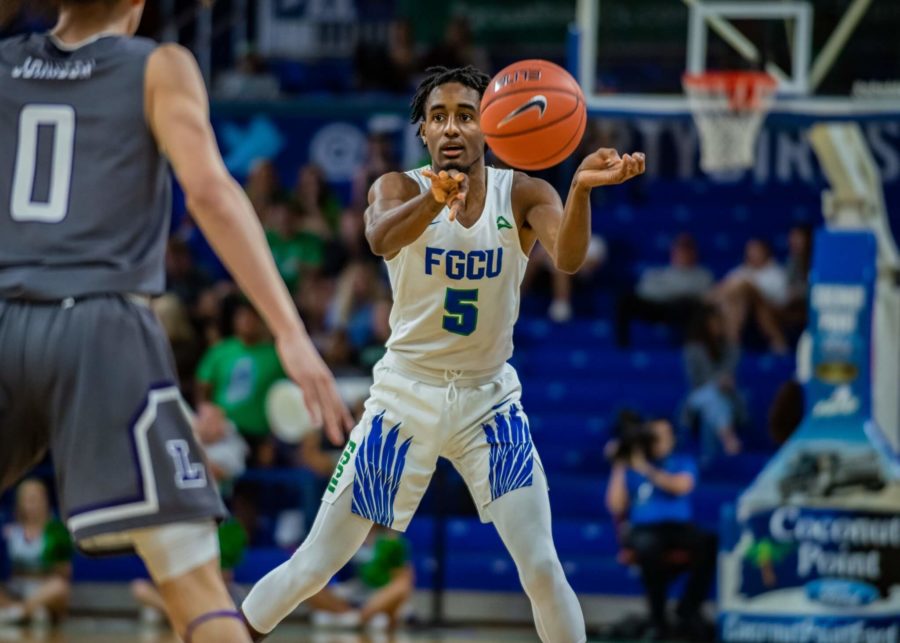 EN Photo by Julia Bonavita // Jalen Warren scored eight of his 16 points in overtime which proved vital to the Eagles in their 66-62 victory over Stetson.

Bryce Thompson
Staff Writer
FGCU men’s basketball pulled out a crucial road victory over Stetson Saturday night in overtime. The 66-62 overtime victory was led by Sophomore Caleb Catto’s career-high night with 19 points. Catto’s career night was highlighted by scoring 8 of the team’s 16 points in overtime, improving their record to 2-2 in the ASUN.
“I thought that was as gritty of a road win as we’ve had since I’ve been here; it was a great team effort and we really had some guys step up tonight,” said head coach Michael Fly. “We challenged them tonight to limit Stetson on the offensive glass and to hold them to zero second-chance points was a really huge accomplishment. I’m really proud of the fight and resolve that the team had especially when we were down some late.”
A game that featured 18 lead changes and a tied score 9 times, FGCU claimed a much-needed road conference win. Stetson was able to outshoot the Eagles 46% to 43% but FGCU’s successful night from the charity strike separated the two teams. The Eagles went 18-20 from the free-throw line while Stetson only shot 6-10.
Catto’s heroic night also featured a game-tying shot with 17 seconds left to force overtime. Overtime went back and forth but FGCU maintained a lead most of the way.
The Eagles are now in a tie for third place in the ASUN after their impressive road conference win, only two games behind first-place Liberty.
The FGCU men’s basketball looks to make it two in a row when they return to Alico Arena to face Kennesaw State on Jan. 16.