No choice without a voice: Students rally to make their opinions heard 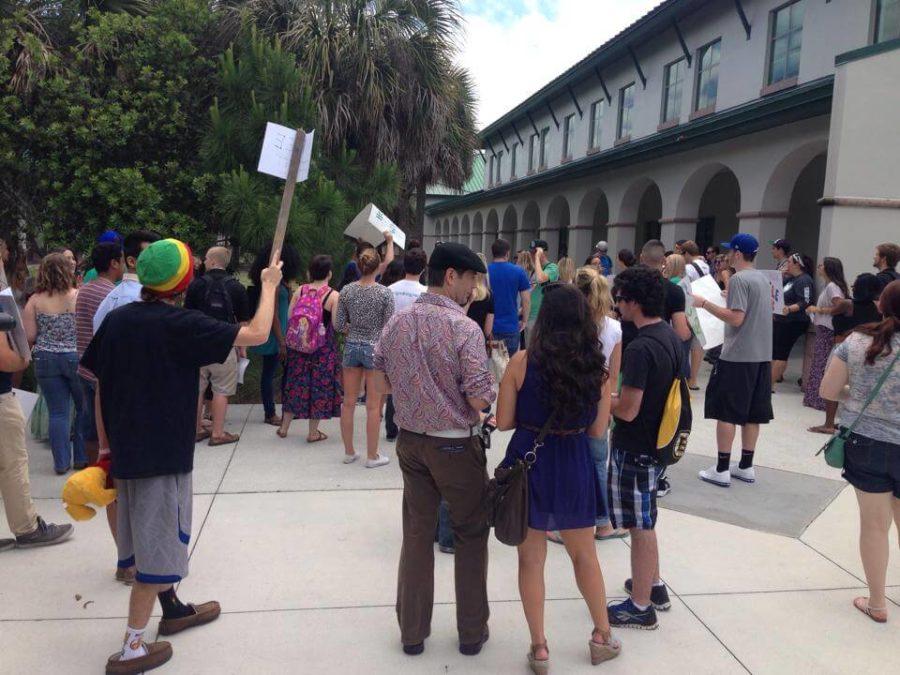 Students in the Rhetoric of Social Movements communication class feel that their voice at FGCU is not being heard. At 12:30 pm Thursday, more than 80 students protested the lack of voice that students face on the FGCU campus.
Last month FGCU announced that Monday Wednesday Friday classes would be integrated into the schedule. The class taught by professors Kim Huff and Amanda Parke, decided to hold a protest to explain their dissatisfaction for the lack of input students have on campus.
“Students do not have enough say in the University’s decision making,” senior Chase Burdick said. “As a student, I feel as though I deserve more of a voice on this campus.”
The protest began in the Cohen Center cafeteria at 12:40 p.m. A student stood up and asked the crowd if they had been given a choice in the food offered on campus. Another student stood up and asked if students were consulted about the parking situation. Both of these questions were followed by a fervent, “No.”
Following the demonstration in the Cohen Center, the students in the class all marched to President Wilson Bradshaw’s office, where three members of the class as well as Professor Parke went inside.
Senior Logan Johnson was one of the students that went to Bradshaw’s office.
“We gathered signatures on a petition we wrote outlining the objectives of the social movement we started for class,” he explained. “I went up to deliver the petitions and explain what the crowd of people was doing outside of their office.”
Johnson was not able to meet with Bradshaw but instead met with his assistant.
“She was fairly receptive and showed interest. She told me she would take a picture of the gathering outside and make sure the whole thing was brought to Bradshaw’s attention,” Johnson said.
Meanwhile, the rest of the class waited outside and continued protesting.
Many students asked the class what they were doing and wanted to get involved.
“A lot of people asked what we were doing,” Burdick explained. “I’ve never done anything like this before.”
This is the second protest that the class has held this semester; the first was on April 3. The protest was marketed through Facebook, Twitter and Instagram.
Delete Image
Align Left
Align Center
Align Right
Align Left
Align Center
Delete Heading