The Ink-lination to get tatted: Students talk about the reasons behind their tattoos 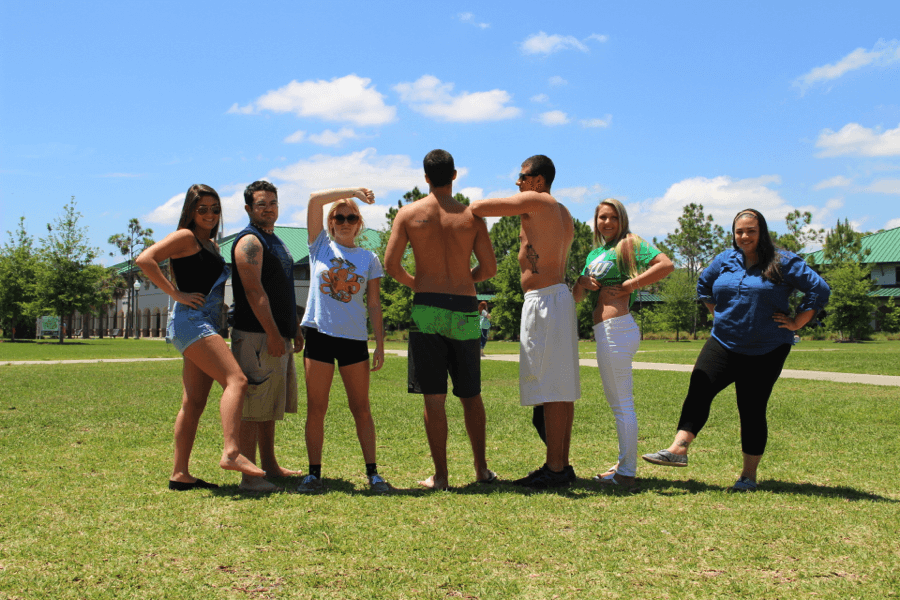 When asked about tattoos, the most common response given is “no regrets.”
There’s usually a stigma around tattoos — whether or not they are appropriate.
Our society has always been timid about tattoos in the workplace, but, the younger generation has begun changing opinions and stigmas about tattoo taboos.
“Our generation definitely views tattoos differently,” junior Andy Grunskis said. “I think we are more open to them. My dad toldmeyoudon’tputabumperstickerona Bentley.”
FGCU senior Trey Went is a home tattoo artist.
Went started one night last year when he asked his roommates and friends to give him a homemade tattoo.
“We used a needle tied to a pencil and dipped it in ink poke by poke,” Went said. “It turned our great after five hours. It started a craze with my friends and we have done about 10 since then including ‘your name’ tattooed on my friends ass, so if someone asks what tattoo, he has he can say ‘I have your name on my ass.’”
Eventually, Went graduated from pick-and- poke tattoos and bought a real tattoo gun. He also began branding himself and his friend.
“I think tattoos are a great form of expression,” Went said. “I don’t want to be covered in them, and I don’t think they are for everyone, but I don’t see anything wrong with people who love tattoos everywhere.”
Grunskis has two tattoos. He believes that tattoos are a great form of expression.
“Both of my tattoos have meaning,” Grunskis said. “I have the cliché mom heart on my bicep, which I got with my mom. I also have ‘Andy’ written on the bottom of my foot from the ‘Toy Story’ movie.”
While there is a belief that people often get inebriated and obtain regrettable tattoos, it seems that is often not the case.
Senior Veronica Tschannen who has two tattoos, said, “Kids these days do not just get tattoos for no reason. Tattoos cost too much money to get an unplanned one for no reason. They’re planned, whether it’s to celebrate someone in your life or as a fashion statement.”
“You can’t even get a tattoo when you’re drunk. Most tattoo artists won’t give you a tattoo if you are drunk. I got my first tattoo when I was 19. I got a pink bow on my hip because I was a dancer for 15 years and wore a pink bow every day. I also have a chain of five links on my wrist, which is in honor of my sorority.”
Although the stigma of tattoos is changing, some people still do not find it appropriate to have tattoos that are easily seen.
Senior CJ Duffie does not have any tattoos, but he wants one.
“I want one but I don’t want one that is exposed to future employers. If I find a tattoo design that fits in a place easily covered up I would get one. It isn’t easy to find designs that fit in those places. When I find a tattoo I want, I wait three years. If I still want it after three years I start drawing it with permanent marker or henna to make sure I like where it will be. I do this for six months,” Duffie said. “I’ve gotten all the way to four months of henna before I decided that I didn’t like one.”
While some tattoos are frivolous, others can have significant meanings, like the death of a family member or the name of a loved one.
Seniors Eric Ros and Jojo Madonna both have tattoos in memory of a family member.
Madonna got a tattoo after her father unexpectedly passed away. “My dad and I used to write each other letters,” she said. “The last letter he wrote to me had my favorite scripture in it. He wrote ‘Love always protects, always trusts, always hopes, always perseveres. Love never fails. Love you forever! Dad’ I had the tattoo artist put the tattoo exactly in my dad’s handwriting.”
Madonna also says she was never a fan of tattoos and never even wanted one.
“I put a lot of thought into what I wanted before I decided to go through with it,” Madonna said. “I don’t regret it for a second. I’m not sure if I’d ever get another. I don’t think anything could really be better than the one I have.”
Ros got a Fleur de Lis in memory of his grandfather.
“The Fleur de Lis also represents the way I live my life since it symbolizes the unity of mind, body, and soul. I got it when I was 17 and five years later I still love it.”
Controversial, significant or simply frivolous fun, one thing is for sure — tattoos are a permanent addition to society.
Delete Image
Align Left
Align Center
Align Right
Align Left
Align Center
Delete Heading