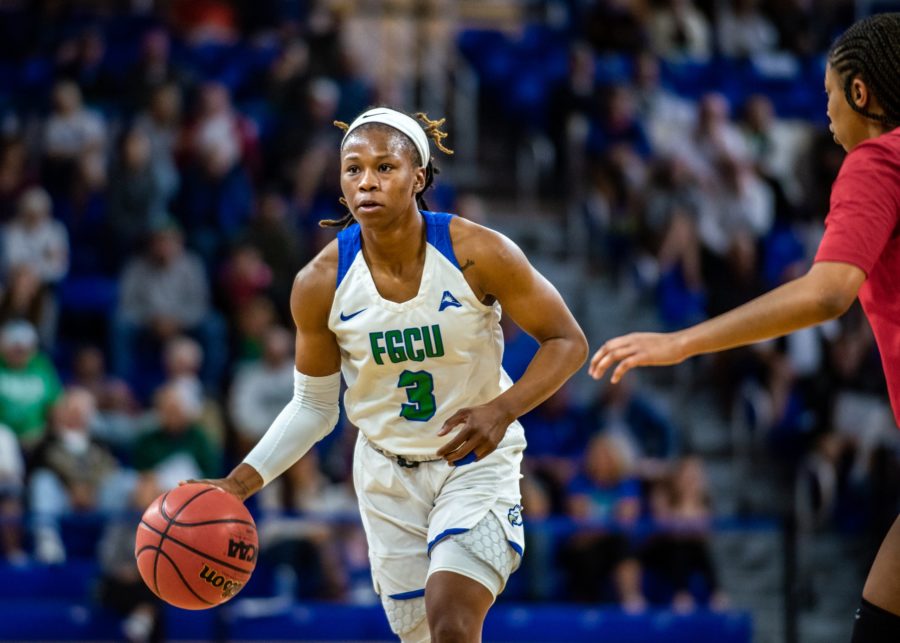 EN Photo by Julia Bonavita // Keri Jewett-Giles' 25 points propelled FGCU past North Alabama for its seventh-consecutive win and sole-posession of first place in the ASUN standings.

Cole Potts
Staff Writer
Keri Jewett-Giles lead the FGCU Women’s team with a game-high 25 points, including 13 in the fourth quarter alone to secure the win against North Alabama this past Saturday on the road.
This win makes the Eagles the first team in the NCAA to reach 18 wins this season while maintaining the nation’s third-longest conference win streak at 33 straight. FGCU also claimed sole possession of first place in the ASUN conference in the process.
The first half was a back-and-forth battle between both teams with six ties and 11 eleven lead changes. With Alabama leading 42-36 with 4:23 left in the third quarter, Jewett-Giles, Davion Wingate, and Ashli O’Neal each contributed to a 12-0 run which gave the Eagles a 48-42 lead to close the quarter.
Headed into the fourth quarter, North Alabama was able to stay in the game until Jewett-Giles was able to put up 13 points to give the Eagles an 11 point lead with 1:15 left and eventually the win.
Ashli O’Neal is only two points shy of 1,000 in her NCAA career following her nine-point outing, in which she also added five rebounds and went 4-for-4 from the foul line.
Davion Wingate was the next highest scorer with 14 points while going 6-11 from the field. Tytionia Adderly contributed six points and team-highs of nine rebounds, five assists and three steals.
“This was a very difficult game,” FGCU head coach Karl Smesko said. “North Alabama is a really good team. It was just good to see us be able to come together and come from behind in the second half and find a way to win. Keri was exceptional. Nas played great defense. Everyone who got out there made a positive contribution, so that was a positive step.”
The FGCU women’s basketball returns to Alico Arena on Monday for a 7 p.m. matchup against Kennesaw State to try and retain it’s current position in the conference standings.