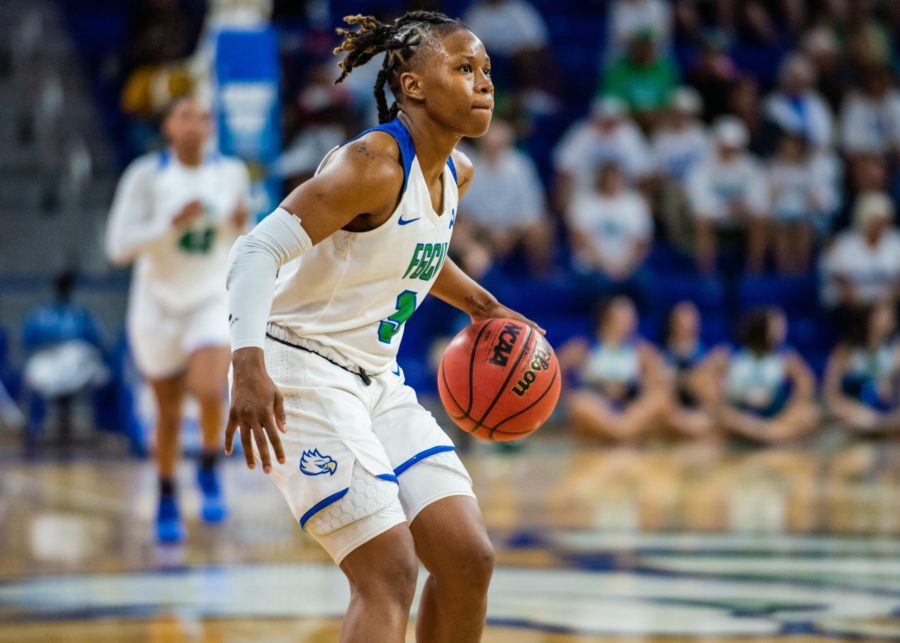 Harold J Solomon IV
Sports Editor
After a blowout 82-39 victory over NJIT, the FGCU women’s basketball team (20-2, 7-0) push their winning streak to nine and extend the nation’s third-longest conference win streak to 35 straight.
For the 2oth time since joining the conference in 2007-2008, FGCU held an ASUN opponent under 40 points while forcing a season-high 27 turnovers. The Eagles also allowed a total of three points in the opening quarter, the second-fewest given up in program history to start a game.
“I was really pleased with our defensive intensity in the first quarter,” FGCU head coach Karl Smeskop said. “We definitely picked it up a notch and made a lot of defensive plays. We didn’t give up very many good looks at the basket. We’re trying to increase how long we’re able to keep that type of intensity going, but that was a step in the right direction.”
Keri Jewett-Giles led the Eagles with a game-high 22 points on 9-for-14 shooting while adding four rebounds, four assists and four steals. Her performance marked the eighth time this season recording 20 points, which pushes her to sixth all-time in program history with 1,277 points in her NCAA career.
On the defensive side, Tytionia Adderly tied with Emma List for a team-high five rebounds while producing four steals for the Eagles.
Following their impressive victory, the FGCU women’s basketball team will have a week to prepare for a road matchup against Liberty on Feb. 1. FGCU is currently three games ahead of Liberty in the ASUN standings, including a win against them from earlier this season.