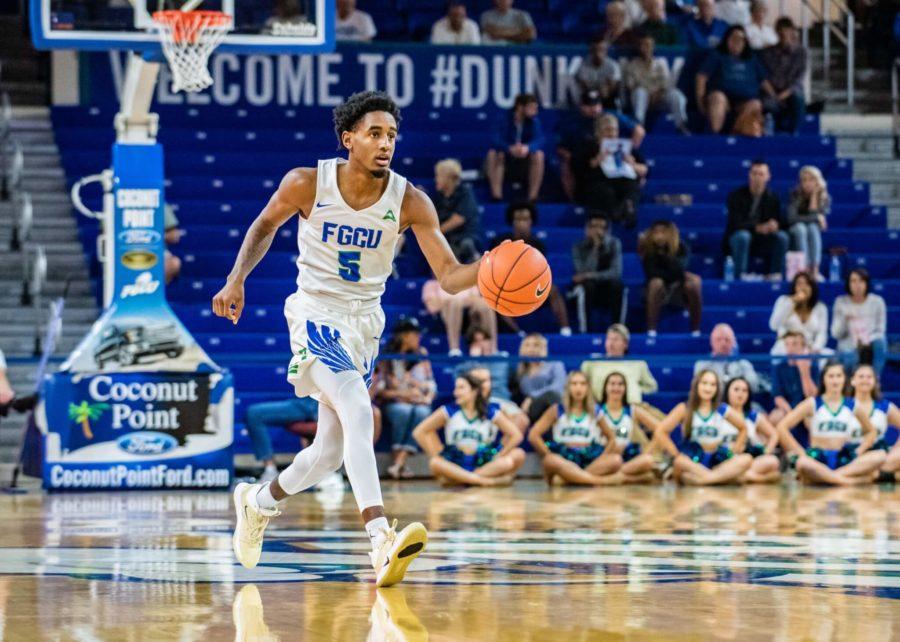 Chase Henry
ENTV Sports Director & Staff Writer
The FGCU men’s basketball team lost its second meeting against Liberty University this season, Saturday night, at the Vines Center by a score of 61-46.
Poor shooting from the floor and turnovers were the main cause of the loss, as the Eagles went into halftime with only three players scoring a basket to total 14 points and giving away 12 turnovers.
For the entire game,  FGCU shot 4-19 on three-pointers as a team with Sam Gagliardi and Zach Scott each leading the way shooting just 25 percent.
Liberty’s packline defense gave FGCU trouble getting into a rhythm offensively, leading to the Eagles trying cross-court passes resulting in turnovers. FGCU turned the ball over 17 times in total after turning the ball over just seven times in the entire game last Thursday against Jacksonville University.
The Flames were able to capitalize on the FGCU’s turnovers, putting up 20 points off of turnovers.
After scoring over 20 points in three straight games, Caleb Catto was limited to just nine points on 3-11 shooting and 1-6 from three in 33 minutes.
Jalen Warren was the Eagles’ leading scorer for the game with 20 points. A total that is one shy of his season-high of 21 points back against Florida Atlantic University in November.
“We had done a really good job the last few games of limiting turnovers which was a problem for us early in the year,” said head coach Michael Fly. “With 20 points for Liberty off turnovers, had we been able to limit that by even half, I think we would have been in a better spot to win this game.”
Up next for men’s basketball is a chance to sweep Stetson University when the Hatters come to Alico Arena on Thursday, February 6, at 7 p.m.