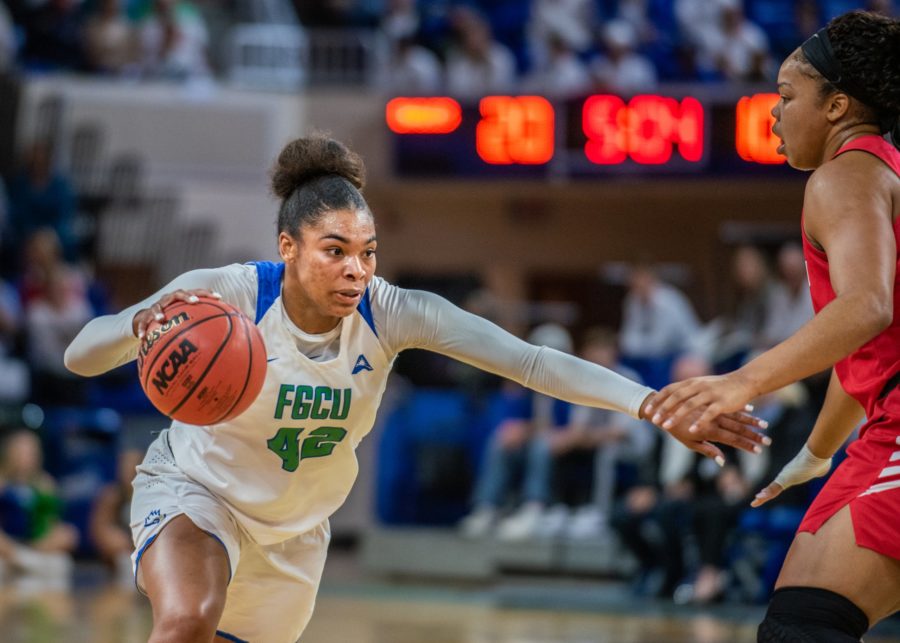 Bryce Thompson
Staff Writer
No. 24 FGCU women’s basketball extended their winning streak Saturday, defeating Liberty on the road 74-65. The Eagles’ 10th straight win continued their red hot start to conference play, pushing their record to 8-0 in ASUN play.
“Liberty came out strong and played really well, shot it well,” FGCU head coach Karl Smesko said. “It was nice to see us be able to make a move early in the second half. KP hit a bunch of threes and had a great game. Ty also had a couple of second-half threes that we’re able to give us a lead and fortunately we were able to hold on.”
Liberty started off scorching hot, shooting 50% from the field in the first half and led FGCU 34-33 at the half.
The performance of the night belonged to FGCU’s Kerstie Phills, who put the team on her back and dropped 13 of her game-high 19 points in the third quarter. Kerstie finished with a career-high five threes and her 19 points are the most she’s scored since joining FGCU last year.
In addition to Kerstie’s night, a few other Eagles had great nights such as Tytionia Adderly who tied her career-high from deep, going 3-9 from three. Nasrin Ulel may have had the most efficient performance for the Eagles, finishing with 18 points 6 rebounds and 5 assists.
The FGCU women’s basketball looks to stay perfect in league play with another road matchup against Jacksonville on Feb. 3 at 7 p.m.