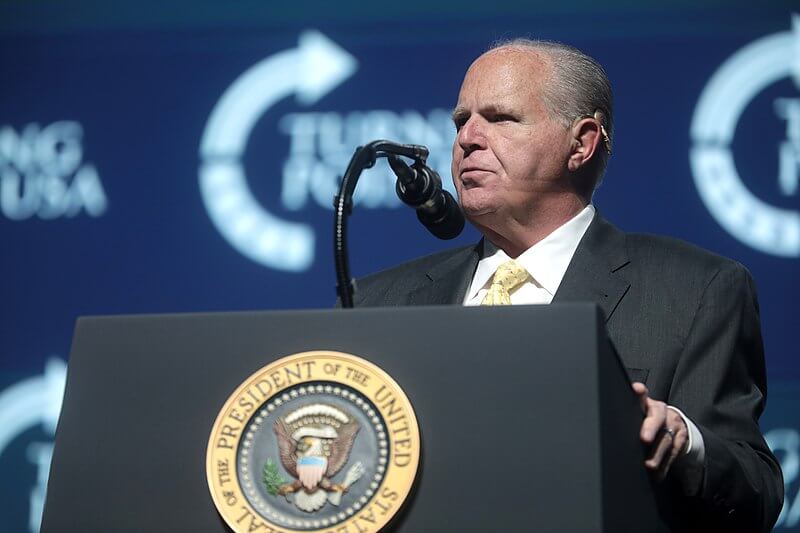 Photo by Gage Skidmore via Wikimedia Commons, labeled for reuse.

By Serena Tartaglia
Staff Writer
Mother Teresa, a humanitarian. Rosa Parks, a civil rights icon. Elie Wiesel, an author and holocaust survivor. Rush Limbaugh, a radio talk show host. All of these people were given the Presidential Medal of Freedom, one of the highest civilian awards in the United States; however, one recipient is not like the others.
According to the Chicago Tribune, Rush Limbaugh the Third began his illustrious and controversial radio career in 1971 as a DJ after flunking out of Southeast Missouri State University. In 1987, former President Ronald Reagan repealed the Fairness Doctrine, which required radio stations to provide free airtime to opposing views when controversial opinions were stated.
And thus began Limbaugh’s reign on radio. He was reprehensible, brash and profane. In December 2019, he had 15.5 million listeners.
Limbaugh does not deserve the Medal of Freedom. To award him with this honor is offensive to every other American who has received one and to every American with empathy. On his radio show, news about the homeless was often preceded by the song “Ain’t Got No Home.” A song called “I Know I’ll Never Love This Way Again” played before reports about people with HIV or AIDS. For two weeks in 1989, Limbaugh performed “caller abortions” on his Sacramento radio show. He would hang up on a caller to the sounds of a vacuum cleaner and a scream. During the Clinton administration, Limbaugh performed a segment about Socks, the Clinton family cat, on his television program. At one point he said, “Did you know there is also a White House dog?” then showed a picture of first daughter Chelsea Clinton, a 12-year-old at the time.
Limbaugh also had a long and disgraceful history regarding women and people of color. In the 1970s, an African American person called his show. Limbaugh could not understand them, and he told the caller to “take that bone out of your nose and call me back.” According to Time magazine, he referred to former President Barack Obama as “Barack the Magic Negro” and played a song by the same name to the tune of “Puff the Magic Dragon.” In 2005, when speaking about feminism, Limbaugh said, “Feminism was established so as to allow unattractive women access to the mainstream of society.” In 2005, when referring to women who protested sexual assault, he said, “They’re out there protesting what they actually wish would happen to them sometimes.”
Limbaugh also expressed disdain for environmental activists and wrote, “There are more acres of forestland in America today than when Columbus discovered the continent in 1492.” The United States Forest Service and the American Forestry Association proved that statement untrue when they stated pre colonial forests have been reduced by nearly 300 million acres.
In 2003, he imitated actor Michael J. Fox’s Parkinson’s disease symptoms on air. Limbaugh wondered if Fox exaggerated the motions for political gain since Fox is a Democrat.
These instances are not an extensive list of Limbaugh’s vile statements. He didn’t earn the medal because of heroic efforts. Limbaugh only received the award because he is a longtime friend of President Trump. Limbaugh recently admitted he had advanced stage lung cancer, and said, “I would like a medal for smoking cigars.”
Congratulations, Rush. You got what you wanted and what you don’t deserve.