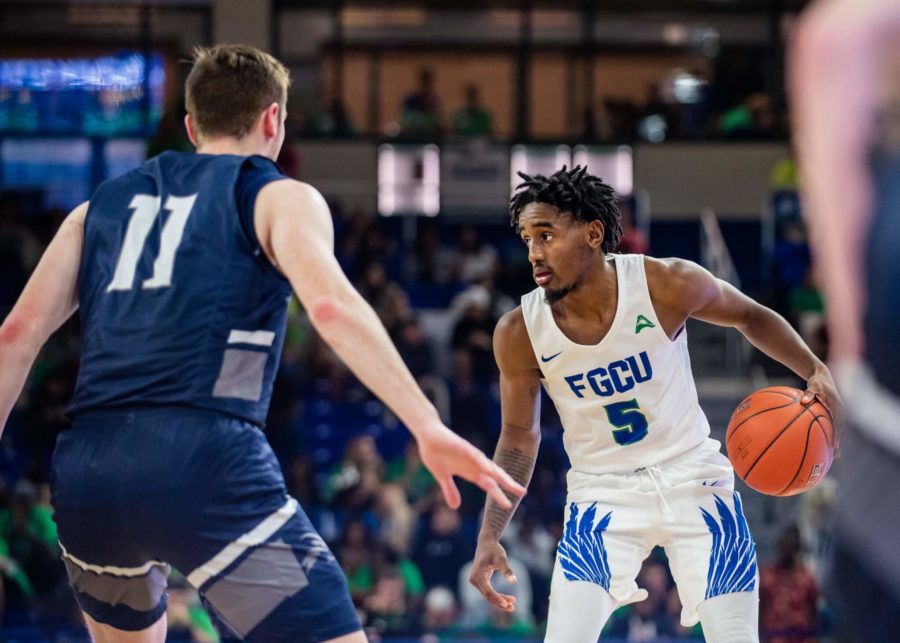 Bryce Thompson
Staff Writer
FGCU men’s basketball lost their third straight game Saturday night at home against in-state rivals UNF, 69-60. The Eagles fall to 7-19 and 4-7 in ASUN for the 2019-2020 campaign. FGCU’s second-half comeback was not enough against the ASUN leader’s UNF.
“I told our players that they did battle and they did compete – we were able to come back to take the lead in the second half which was a positive – but I told them we don’t do moral victories at FGCU,” said head coach Michael Fly. “Obviously we’re frustrated because we know that’s a game, like several recently, that we have the capability of winning. It comes down to execution and, though we’re closing the gap, you can see with teams like North Florida and Liberty, they’re limiting those mistakes which is part of the success they’re having.
A second-half comeback wouldn’t be possible without a first-half deficit. UNF dominated early including a 12-2 run lead to a major momentum swing going into the break. UNF shot 42% from the field and went into the second half up 34-24.
FGCU’s comeback began with a quick 8-0 run to open the second half, which extended into a 16-6 run giving FGCU the lead with an emphatic Justus Rainwater dunk.
A game featuring 12 lead-changes and 7 ties, came mostly in the second half with a back-and-forth pace.
The story of the game comes down to the deep ball, an aspect of the game that was completely owned by UNF.
FGCU needed to connect from deep to be able to complete a comeback and only shot 2-17 from deep, while UNF finished 10-28. The Eagles eventually left Alico Arena with a 69-60 loss and looking to regroup.
The FGCU men’s basketball team will be back on the road and return to action Thursday, Feb. 13 against Kennesaw State.