The food truck boom of SWFL is here, but for how long? 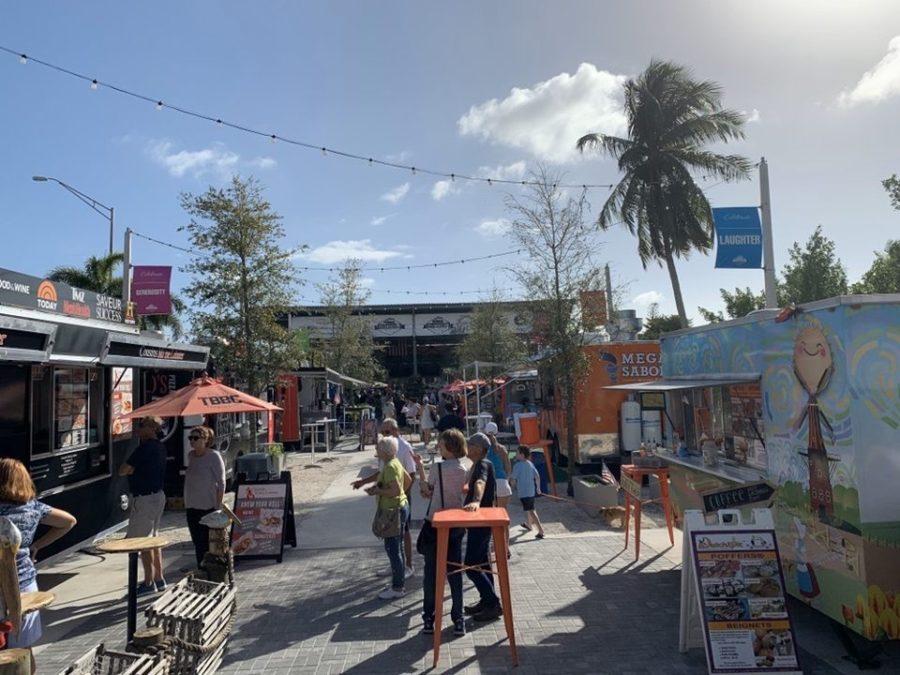 By Samantha Roesler
Opinion Editor
In large metropolitan areas, food trucks are seen as an easy way to grab a quick meal on the side of the street. The food truck industry has been rising in Southwest Florida for a couple of years and is now a booming trend within demographics of all ages.
Millennial Brewing Company in Fort Myers has been operating for three years and owner Kyle Cebull said that he has definitely seen the positive effects of the SWFL food truck boom.


“When we first opened, that’s why everyone came here,” Cebull said. “People were excited about food trucks. Now, there are more trucks and events around the area and the urgency just isn’t there.”
Three years ago, when Millennial Brewing Company was established, there were far fewer food trucks than there are today.
“There were around 15 food trucks,” Cebull said. “Now, there are around 60 to 70. It’s grown by 400 to 500 percent easily.”
However, local governments in cities like Fort Myers are not making it easy for mobile vendors to thrive. As the amount of food trucks continues to rise, there becomes less space for the trucks to share.
“One of the things that needs to change is for the municipalities to allow the trucks to park anywhere,” Cebull said. “Now, it’s pretty much limited to breweries. All these mitigating counties have rules and laws, and at the end of the day it’s about politics. People can’t go park their truck downtown because restaurants there don’t want that competition around.”
Fort Myers has strict permitting laws for food trucks. They can only operate from sunrise to sunset, they can’t stop on any arterial street, road or highway, and mobile vendors who have a temporary use permit can only be at that spot for 15 minutes maximum, according to a Lee County Ordinance.
These strict laws make running a food truck in SWFL difficult.
“You can’t really go just anywhere,” said Kyle Govan, co-founder of the popular food truck BuddhaBlends. “You can go and get a temporary permit, which we’ve never done before, but that gives you the right to set up in an empty lot or a place like an abandoned run-down gas station.”
The temporary permits last for 45 days and then expire for 30 days.
“There are some weird rules that aren’t too favorable,” Govan said.
Govan and his wife Ariana were inspired to start a food truck after seeing the popularity of the industry on the West Coast back when they went to California in 2016.
“We wanted that California vibe, and we wanted to do something for ourselves,” Govan said. “With a food truck, it’s a lot less of a startup cost, granted it is still a lot but less than a traditional restaurant.”
BuddhaBlends food truck opened in September 2017 and sells only vegan food. The vegan option created a loyal base in the community which helps them stay on top of competition.
“We wanted to bring a healthy mobile option that no one has ever done in Fort Myers,” Govan said. “We are a one of a kind food truck, so we don’t have much competition.”
Despite having a solid base of loyal customers, Govan still recognizes the rise of food trucks in Southwest Florida and the difficulty of having to constantly search for business.
“When we started, we thought we knew all the trucks and for the most part we did, but I’d definitely say within the past year and a half we’ve seen so many more trucks since,” Govan said. “Not just in Fort Myers, but Naples has increased.”

SWFL residents are being drawn toward a new type of atmosphere to get a cocktail and a quick meal—a food truck park located in East Naples.
Celebration Park has been open for only a year but is a social hotspot whenever they’re open. The park is open every day except Mondays starting at lunchtime and always has eight food trucks running during operating hours.
“I saw the takeover and boom of food trucks happening,” said Patrick Johnson, the manager of Celebration Park in Naples. “After seeing it, I said, ‘We can do this.’”
Johnson grew up in SWFL and remembers feeling like an outcast around the main demographic of retirees.
“Being born and raised (in Naples), I didn’t feel welcome because of the older demographic,” Johnson said. “I wanted (Celebration Park) to be a place for everyone— young, old, rich poor— and I think it’s working.”
Tucker Jones co-owns the Nawty Hogg BBQ food truck with his brother-in-law Aric at Celebration Park. Their truck has been stationed at Celebration Park since the park opened in November 2018.
“My brother-in-law asked me one day if I wanted to go and look at trucks, we ended up buying one that day,” Jones said. “It was a spur of the moment thing. Then, Celebration Park contacted us asking if we wanted the last spot and we said ‘absolutely.’”
Although trucks at places like Celebration Park have the advantage of expecting daily customers compared to those who need to advertise themselves each day, challenges do arise for these vendors with the amount of food they need to prepare.
“You never know what business is going to be like that day,” Jones said. “Quality food is key. We don’t want to be making too much food on a Monday and be selling that food still on a Thursday.”
Johnson takes the time daily to ensure the food at all the trucks are up to standard.
“I test the food every day, and I give a list of comments on how to make it better,” Johnson said. “I’ll give them hints but won’t tell them how to fix and manage their truck. They are held to a high standard.”
Anne Hanlon and her husband Kevin spend their time in Naples during the winter season and live in Boston for the remainder of the year. They have been customers to Celebration Park since they first opened.
“I look for authenticity. I like how every truck here is different, and cleanliness is also important,” Hanlon said. “I don’t think price is an issue because it is worth it for the quality.”
Places like Millennial Brewing Company and Celebration Park are constantly finding innovative ways to accommodate the increasing amount of food trucks in the area.
Millennial Brewing Company hosts food-themed events such as vegan food night or a pizza food truck festival where they’ll have anywhere in between eight to 11 trucks running at once to keep customers wanting to come back.
“We realized going into our second year that just having food trucks wasn’t enough,” Cebull said. “It was a lot easier when we opened. Friday night food trucks would have 1000 people, but now we could have no one show. The themed events make it seem much more special to people.”
Johnson keeps customers coming to Celebration Park by hosting different bands, outdoor games and entertainment, and daily drink specials.
“We want strangers to talk, meet new people and make friends,” Johnson said. “This is a relaxed environment. The goal is having a Celebration Park Fort Myers, Tampa, Miami— we want to be everchanging.”
Delete Image
Align Left
Align Center
Align Right
Align Left
Align Center
Delete Heading