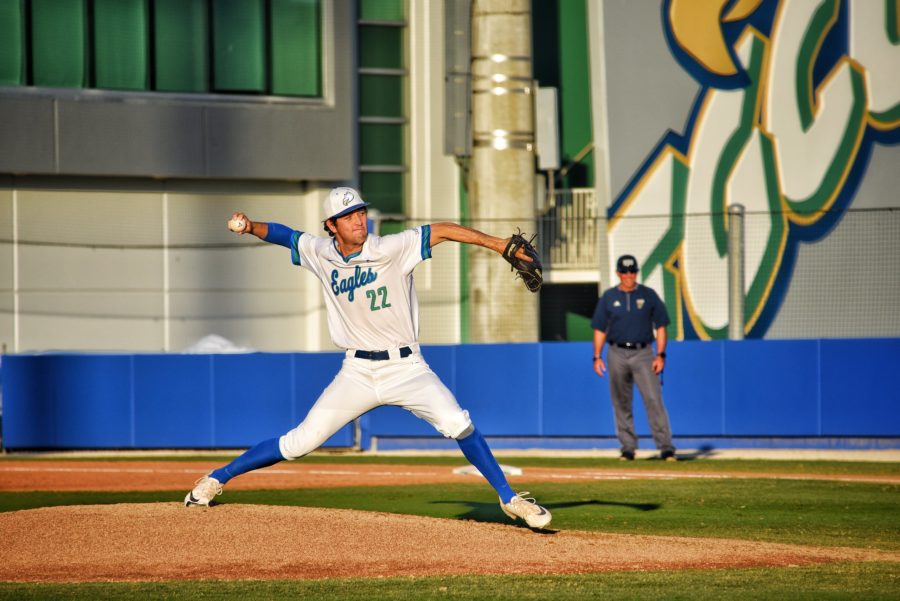 Jake Henning
Assistant Sports Editor
The FGCU men’s baseball team (0-4) lost their fourth straight game of the season on Tuesday night, defeated by a score of 6-4 to FAU.
Nikolas Bitner started the night on the mound for the Eagles, lasting three innings and giving up three runs on four hits and two walks. Bitner also added two strikeouts to his line for the night.
FGCU used eight pitchers on Tuesday night, all combining to give up six runs on nine hits and three walks. All pitchers, except one, would add to FGCU’s eight strikeouts in total.
FAU got busy pretty quickly, as a run would come in to score after a fielding error by pitcher Nikolas Bitner. The Green and Blue had two errors on the night.
The Eagles would be next to score as an Alex Brait single brought in FGCU’s first score of the game. After Brait’s single and a walk by Brandon Dorsey, the bases were loaded for Senior second basemen Richie Garcia.
Garcia proceeded to send a rocket to center field for a double and clear the bases, bringing FGCU’s lead up to 4-1.
FAU wouldn’t let their night end, as a double to right and sacrifice fly brought them within one at the end of the third inning. They would then score two in the sixth and one in the eighth to secure their victory on the night.
The FGCU men’s baseball will be back at Swanson Stadium for a three-game homestand against Kent State starting on Friday, Feb 21. at 6:30 p.m., with Saturday’s game at 2 p.m., and the final game of the series set to begin at 1 p.m.