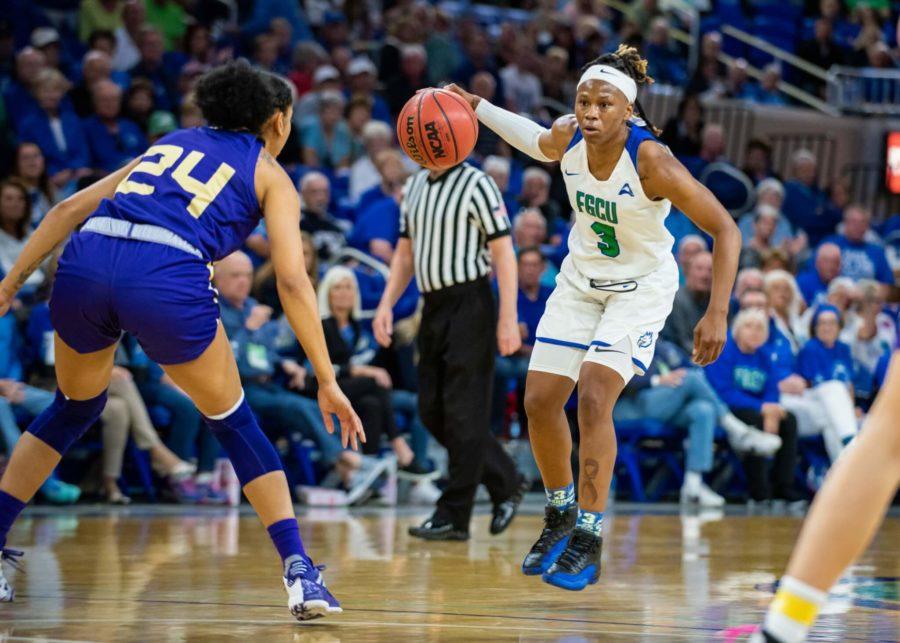 EN Photo by Julia Bonavita // Keri Jewett-Giles led the Eagles with 19 points and produced a game-high seven steals. The No. 23 ranked FGCU women's basketball was handed it's first conference loss in over two years, losing to North Alabama 61-55 at home on Saturday night.

Harold J. Solomon IV
Sports Editor
North Alabama handed the No. 23 FGCU women’s basketball their first regular-season conference loss for the first time in two years, upsetting the Eagles 61-55 on Saturday night in Alico Arena.
“North Alabama beat us. They were the better team today,” FGCU head coach Karl Smesko said. “They played with great energy and great passion. I think it’s good in a way we got to play a game at that kind of competitive level going into the (ASUN) tournament so we understand what we’re going to have to adjust, what we’re going to have to do to be successful in the tournament.”
The defeat marks just the third loss in 108 conference matches at Alico Arena since the 2007-2008 season. The loss also snapped the 16-game overall winning streak of the Eagles, who had not lost since Dec. 19 against LSU.
Keri Jewett-Giles led FGCU with 19 points and recorded a game-high seven steals. With her performance, Giles pushed her NCAA career point total to 1,429 which is fourth most for a player to finish their career as an Eagle.
Davion Wingate scored 13 points of her own which pushed her NCAA point total to 1,300, and Kerstie Phills recorded 11 points of her own and seven rebounds.
Tytionia Adderly produced a game-high 18 rebounds, which moves her into second place all-time on the ASUN career list with 1,159 rebounds.
The FGCU women’s basketball team will look to close out the regular season on a high note in its match against Jacksonville on Monday, March 2 at 7 p.m. before the ASUN Tournament on Saturday, March 7.