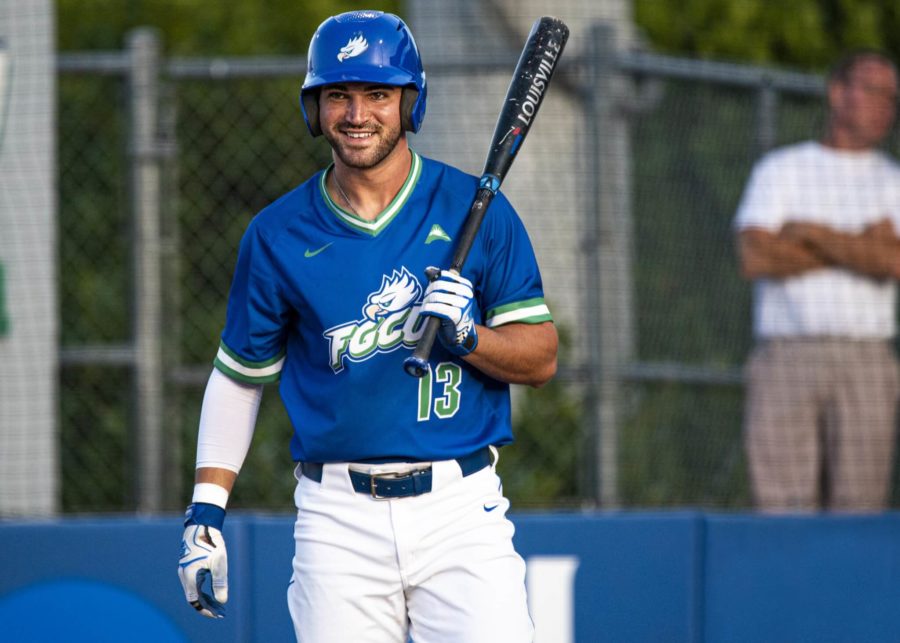 Jake Henning
Assistant Sports Editor
Alex Brait’s walk-off double in the bottom of the tenth would give FGCU (9-7) a 6-5 win over Georgetown (4-12), continuing their impressive streak of five wins in a row.
Brait brought both the tying and winning run home, as he went 3-5 with two RBIs on Tuesday night’s win at Swanson Stadium. The Eagles are 3-1 in midweek games this season.
“One of our goals this year was to be better in midweek games, and I’ll take three-of-four,” head coach Dave Tollett said. “These midweeks have been tough. Tonight, we were trying to save some guys that were taxed this weekend so we were just trying to get through the backend.”
FGCU took the first lead of the game, as a Kyle Machado double down the left line would bring in Brian Ellis to score. Machado had two hits in this game, along with an RBI and a walk.
Georgetown took the lead in third with a two-run shot to left, but FGCU’s Richie Garcia would respond with a home-run of his own, putting the Eagles ahead 3-2 going into the fourth.
An RBI double gave Georgetown the tie to start the fourth inning, but Cameron Krzeminski’s first career home-run quickly broke that tie and put FGCU up 4-3.
The Hoyas grabbed two runs in the fifth inning, one off of a fielding error and another would come in to score with a walk. Georgetown had a 5-4 advantage heading into the sixth.
Both teams would go quiet for the next three innings, until Alex Brait’s double in the bottom of the eighth brought FGCU back into the game, tying the score at 5-5.
The game went scoreless in the ninth, and in the tenth Marc Coffers gave FGCU a single to start off their at-bats. Coffers then advanced to second on a balk by the Hoyas. A sacrifice bunt by Richie Garcia would put Coffers and the winning run on third base.
With Machado being intentionally walked and Krzeminski being hit by a pitch, the Eagles had bases loaded with Brait coming to the plate. Brait would then deliver the game-winning hit and end a miraculous night for FGCU.
The next matchup for FGCU will be back at Swanson Stadium on Friday, Mar 13, when they take on Marist for a three-game series.