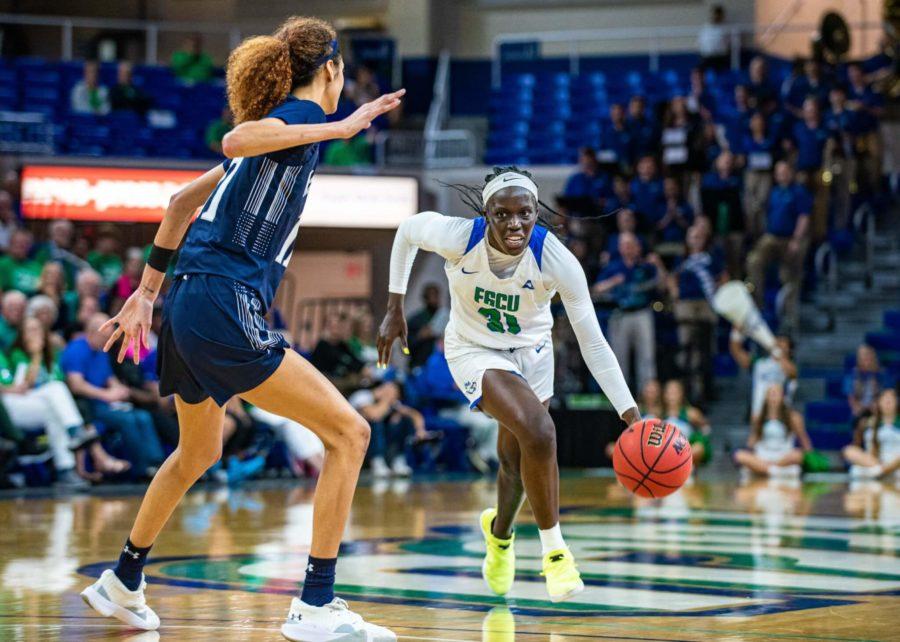 Harold J. Solomon IV
Sports Editor
Keri Jewett-Giles and Nasrin Ulel’s combined 42 points pushed the No. 24 FGCU women’s basketball team past North Florida’s defense in their 73-57 win in the ASUN semifinals on Wednesday night.
The win sends FGCU back to the ASUN Championship for its ninth-consecutive appearance, extending the conference record. The conference finale will be a rematch of last year’s game, with Liberty coming to Alico Arena following their 90-87 victory over North Alabama.
“There’s definitely a lot of bright spots,” FGCU head coach Karl Smesko said, “(such as) the way we came out in the second half, moved the ball and knocked down shots. We were getting open threes and had them spread out and got layups, which helped us extend the lead. Hopefully, there’s a lesson to be learned about finishing the game the way we want to.”
The first quarter of the game opened up with both teams going a combined 1-13
from the field before Jewett-Giles opened up with a three-pointer at the five-minute mark, followed by a strong layup by Davion Wingate.
The Eagles kept up their scoring mojo into halftime and built their lead up to 20 points at the start of the third quarter and never let it up, finishing off the Ospreys 73-57.
The No. 24 FGCU women’s basketball team will face Liberty in the ASUN Championship on March 15, with a 3 pm start time.