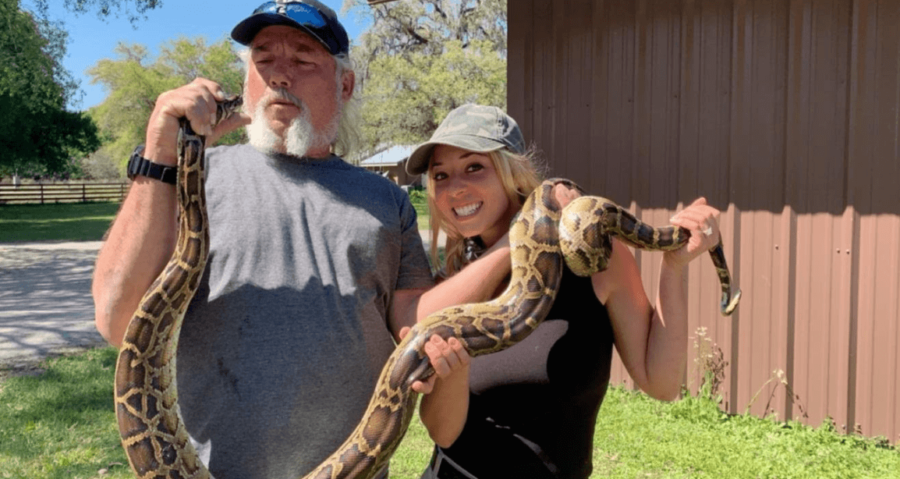 Photo provided by Brittany Borges. Dusty "The Wildman" Crum and Brittany Borges holding a python. The two star on the Discovery Channel series, Guardians of the Glades.

“It was an accident!” Brittany Borges said while laughing, when asked how she got into python hunting.
Borges, 28, lives in Naples, Fl with her husband. The couple own a plumbing business together.
Borges is featured on both seasons of the Discovery Channel show, Guardians of the Glades. She is the only female python hunter on the show.
The docuseries follows perpetually shoeless Dusty “The Wildman” Crum and his team as they capture and subdue invasive Burmese Pythons in the Florida Everglades.
Two years ago, Borges was drinking wine with her mom when the two discovered that there was an opening on Crum’s team. Her mom jokingly urged her to apply. Prior to her induction to Crum’s team, Borges had no experience hunting pythons.


“I never expected that they’d actually choose me,” she said.
The invasive snakes have eaten their way through the everglades since their debut through the exotic pet-trade in the 1970s, decimating native wildlife populations along the way. Burmese Pythons often reach lengths of 12 feet or more, with some reaching almost 20 feet. It’s estimated that there are tens of thousands in the state.
Borges is an enigma in a number of ways. The only hunting that she is willing to do is python hunting, because she knows it’s for the greater good. She prefers to catch the pythons and leave the killing up to her teammates.
“I love animals so much; I really can’t kill them,” Borges said.
She killed her first python just last month out of necessity. She said she cried after the ordeal.
Borges said that the python had been stabbed on the back of the head by one of her teammates, which is the most humane way to kill them. It was presumed dead and being measured when it suddenly leapt off the table.
“I had to re-catch it and quickly stab it again,” Borges said. “When you stab it, you have to scramble the brains back and forth.”
The Florida Fish and Wildlife Commission (FWC) refers to this gnarly practice as brain destruction, which sounds like a name for a metal band.
Borges said her python hunting team tries to euthanize them in the quickest and most humane way possible. She said that a lot of hunters will cut off the head, which is considered by seasoned python hunters to be inhumane because they can live for up to an hour after decapitation.
According to the FWC’s website: “Although not the recommended method of euthanizing pythons, cranial concussion (stunning) by skilled personnel followed by decapitation is considered an acceptable method of killing large snaked by the American Veterinary Medical Association (AVMA) if immediately followed by brain destruction.”
Borges said that one of her most memorable encounters with pythons was about a month ago. The encounter can be seen on season two, episode four of Guardians of the Glades.
“Normally they put up a fight and when you catch them, they realize there’s nothing they can do and relax,” she said. “I had this one by the head, we’re putting it in the bag, and it starts sticking its tongue out at me. So, I look at it and stick my tongue out at it. He tried to attack my face after that.”
Despite “accidentally” getting into python hunting, Borges is proud to be a part of the solution.
“I’ve learned so much about the land we live on and the threats it faces in just two years,” Borges said.