We need zoos more than ever 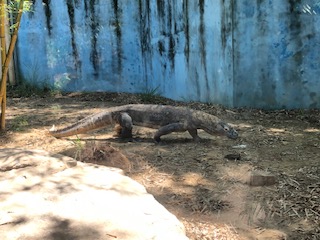 Komodo dragon in Jacksonville Zoo. Animals like the Komodo dragon are kept by zoos for breeding and conservation purposes as part of the Association of Zoos and Aquariums’ Species Survival Plan. Picture provided by Samantha Roesler.

By Samantha Roesler
Opinion Editor
Unless you live under a rock, you probably have heard at some point or another the story of Harambe, the western-lowland gorilla who resided peacefully at the Cincinnati zoo until he was suddenly shot dead when a child fell into his enclosure.
This sparked major controversy from animals-rights activists all around the world, some blaming the parents for not properly watching their child, and some blaming the zoo for not having proper safety precautions around the gorilla’s exhibit.
No matter who is to blame, instances like what happened to Harambe and other circumstances that have occurred in zoos have created the debate of whether or not zoos are inhumane.
I am well aware that there are many zoos on this planet that horrifically mistreat animals. Roadside zoos are a huge problem. They’re unaccredited, too small, and the animals are often found living in their own dirt.
Unfortunately, there corruption exists everywhere. In clothing factories, restaurant chains, even inside jails. Does that mean we should stop wearing clothes, eating at restaurants, and imprisoning lawbreakers? No.
Do the incidents that immoral people treat animals cruelly for profit mean we should stop supporting reputable zoos for educational and conservation purposes? No.
It is time that people start appreciating all the benefits that zoological parks bring into our society and stop focusing on the inhumane people that give zoos a bad reputation. Why should we ignore the constant conservation efforts by zoos and the continuous education programs that zoos hold for future generations- the generations that will eventually be in charge of conserving our Earth?
Conservation and education are two main goals of modern, reputable zoos. Zoos use portions of their profits towards restoration and protection efforts. For example, the Naples Zoo in Florida has donated over $1 million in the past four years to help animals in the wild. More specifically, the Naples Zoo works with the Wildlife Conservation Society to fund the Tiger Conservation Campaign. On a more local level the Naples Zoo works with the Florida Fish and Wildlife Commission to manage the population of the endangered Florida panther.
The International Union for Conservation of Nature has confirmed that there are 33 species listed “extinct in the wild.” This means that all the living members of a certain species reside in captivity. An example of this would be the Panamanian golden frog. In 2006 they were believed to become extinct since there wasn’t a way to recover from their rapidly declining population, but thanks to captive breeding accomplished by the Baltimore Zoo, over 1,500 species of this frog now live in zoos throughout North America and Panama, according to Encyclopedia Britannica.
Reintroduction is another aspect of animal conservation that zoos work on endlessly. The most popular example of reintroduction would be the case of the golden lion tamarin. This tamarin was listed by the International Union for Conservation of Nature as critically endangered for almost 30 years, with fewer than 200 individuals in the wild in the 1970s.
Thanks to the hard work of the Smithsonian Zoo and its Golden Lion Tamarin Conservation Program, their status was upgraded from critically endangered to endangered in 2003. Today, about one-third of the wild golden lion tamarin population originated from human care according to the Smithsonian’s National Zoo and Conservation Biology Institute.
Not only do zoos care about animals and the rapid decline of various species, but they also focus on the human population. Zoos often have specific education focuses for kids and adults alike. Within the past week, the Association of Zoos and Aquariums awarded the Birmingham Zoo in Alabama the 2019 Education Award. Birmingham Zoo is known for its “ZooSchool,” a week-long program aimed toward 7th graders that strives to “ensure each student departs with an abundance of knowledge and a greater appreciation of the natural world.”
So, an institution that works hard to conserve animals and educate people on the importance of protecting species can’t be all bad, right?
As reported horrific accidents and situations inside zoos increase, the Association of Zoos and Aquariums is working hard to get more zoos around the country accredited. This accreditation process is very thorough; their Accreditation Commission makes sure zoos meet standards for proper living environments, social needs, enrichment, and there is an evaluation of the applicant zoo’s veterinary program.
Since it is such an in-depth process to get a zoo accredited, getting all zoos to be accredited facilities will take time. However, if you were against zoos when you started reading this and held the view that zoos did nothing but take animals out of their native habitats, I hope that you took this information that I gave you and realized that as our Earth gradually deteriorates, zoological parks might be our only hope.